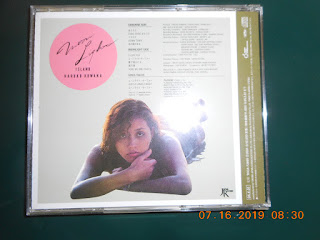 Happy Monday! Thankfully, the torrid heat and humidity have decreased noticeably over the past 48 hours. A lot of people appreciated the summer weather but even the most ardent sun worshipers were admitting that Saturday was just a tad too hot. Well, that wasn't certainly not the case today.


Y'know...I had thought that one of us here at "Kayo Kyoku Plus" already provided his or her article on "Horo", the title track from Chu Kosaka's（小坂忠）4th album from 1975. But actually such was not true. I guess it was because that some of us often referred to the album in other articles and correspondence concerning Kosaka.

Then, allow me to rectify this situation. "Horo" was written and composed by Haruomi Hosono（細野晴臣）, Kosaka's old bandmate from Apryl Fool（エイプリル・フール）which had its days in 1969. Now, I'm not sure whether the above video is the original 1975 recording or the remake that Kosaka made for his "HORO 2010" album in March of that year, but this is a nice funky and bluesy number with great vocals by him that I could imagine the late great Ray Charles swaying back and forth to. "Horo" means "wandering", and considering that another track from the 1975 album, "Fuuraibou"（風来坊）, also referred to "wanderer", I'm kinda wondering if the singer-songwriter and his fellow musicians including Hosono did think of themselves as somewhat vagabond-ish Japanese New Musicians in their existence in the music industry back then.

Listening to "Horo", I think the best setting for this in a live session wouldn't be in a huge arena such as Tokyo Dome, but a small basement club in a bohemian neighbourhood such as Shimo-Kitazawa. To be specific, it would be Kosaka and his small group headlining on a tiny stage in front of a stylish brick wall.

"Horo" has gotten its cover versions. In fact, Akiko Yano（矢野顕子）provided one such cover on her 1977 album "Iroha ni Konpeito"（いろはにこんぺいとう）. Yano takes things just a bit slower and provides some of those silky and kittenish vocals, but the original funkiness and bluesiness aren't lost here.


Now, the reason that I decided to write this article in the first place was that I listened to Haruko Kuwana's（桑名晴子）1982 "Moonlight Island" album of cover songs, and felt that it was time to take a look at one of the tracks there that I hadn't written about in my original article on the album. Plus, Come Along Radio has given his own thoughts on "Moonlight Island" on Reddit, so you can take a look at it right here.

"Horo" is the first track on "Moonlight Island" for the video of the album above, and Kuwana ramps up the funk right from the get-go with that joyful "ALL RIGHT!". There is much more of a proud strut down the main street with this version, further emphasized by an electric guitar solo by either Fujimal Yoshino（芳野藤丸）or Makoto Matsushita（松下誠）. In fact, according to the liner notes, it looks like the entirety of AB'S helped out in the recording of the album.
Posted by J-Canuck at 8:16 PM