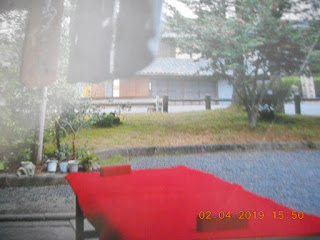 I don't quite remember how I heard about Shinichi Mori's（森進一）"Saraba Tomo yo" (Farewell, My Friend). It could have been from a performance on "Uta Kon"（うたコン）or I just simply came across it during my frequent forays on YouTube. Whichever the case may be, it is an interesting ballad that became Mori's 30th single from April 1974.


"Saraba Tomo yo" has been classified as an enka tune but there's a part of the intro just before Mori starts singing that kinda hits me like a ton of bricks since it doesn't sound like a typical enka arrangement. I'd say that the part in question sounds rather European as in some sort of melancholy passage from an epic bittersweet classic.

I may have mentioned this before in past Mori articles, but this is the fellow who seems to be the expert on melancholy kayo. That boyish look with the puppy-dog eyes and the quaver in his voice which always makes it sound like he's on the verge of a major bawl are Mori characteristics that have endeared him to his fans for decades.

Yu Aku（阿久悠）is behind the lyrics of a forlorn and defeated man who sees his beloved walk away for good without looking back before boarding that train due to some possible betrayal or other relationship-breaking conflict. Meanwhile, Kosho Inomata's（猪俣公章）music is the equivalent of a storm rising and lowering in tempo as it blows around the imminently ex-couple.

"Saraba Tomo yo" managed to peak at No. 5 on Oricon and ended the year as the 36th-ranked single.


Speaking of singers who have their hearts on their sleeves, there is also Keiko Fuji（藤圭子）who knows a thing or two about heartbreaking ballads. I couldn't find out when she performed "Saraba Tomo yo", but as usual, she puts out her all into her version, especially with that bitter growl in her delivery. Nice use of that oboe and trumpet, too.
Posted by J-Canuck at 7:42 PM