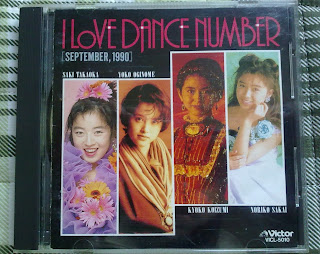 Recently, I’ve found a compilation called “I Love Dance Number [September, 1990]” in a Brazilian online marketplace. Comprised of singles released in 1989 and 1990 by female pop singers signed to Victor Entertainment (ビクターエンタテインメント), most of them aidoru, I knew right away that I had to buy it… and it was cheap, which is always a good thing.

The artists were quite diverse, ranging from famous aidoru such as Noriko Sakai (酒井法子), Kyoko Koizumi (小泉今日子) and Yoko Oginome (荻野目洋子), passing through some middle ground names like Saki Takaoka (高岡早紀), to a good portion of obscure singers (that’s the fun of these compilations, by the way). Musically, despite the word ‘dance’ in the title, it also offered a good variety of genres, from rock, American pop, aidoru-pop, some exotic stuff and even a more laidback Japanese-style ballad (not enka, but something middle-of-the-road).

Before talking about some of the songs, here's the complete tracklist:

The compilation starts in a good note with the summery “Diamond Blue” (ダイヤモンド☆ブルー) by Noriko Sakai, a song I could totally see AKB48 recording nowadays, or maybe five years ago. Following, there’s the obscure “Suki Dakara” (好きだから) by Yoko Kuga (久我陽子), which, as a friend pointed out to me earlier, could have been the ending theme to a shoujo/magical girl anime at the time, thanks to its overall dreamy and romantic feeling. Unfortunately, though, the video above only showcases a small bit of the song.


Like I mentioned earlier, besides Noriko Sakai, the other two big stars on this compilation are Kyoko Koizumi and Yoko Oginome. While Nori-P was still a relatively new aidoru in 1990 and, therefore, still seeking her true big break (it would eventually come in the form of her many acting roles in trendy dramas and, musically, “Aoi Usagi” [碧いうさぎ]), Kyon Kyon and Oginome were already past their prime (both girls also branched out into acting, but I think they were bigger as aidoru singers in the 80s). In the case of Yoko Oginome, even if the edgy “Gallery” (ギャラリー) wasn’t something completely fresh or different from her 80s streak of Euro-oriented singles, I think it was still able to showcase a more mature side of her.


One of the things I liked the most in this compilation was how adventurous a couple of the songs sounded, even if the ending result came out as a little awkward at times. Like Yoko Kuga’s “Suki Dakara” before, it’s unfortunate that just some seconds of “Wet Wet” are available on YouTube, since this song by sexy aidoru Reiko Hayama (葉山レイコ), with its heavy sexual mood, is one of the most unique songs compiled here (the song begins in the 1:47 mark, by the way). The other strange song is the lysergic and almost psychedelic “Furifuri Tengoku” (フリフリ天国) by another sexy aidoru, this time our beloved Saki Takaoka. The link for this song is not available to me here in Brazil, but maybe it’s open to other countries.

Between “Wet Wet” and “Furifuri Tengoku”, one can listen to “Dokuritsu Sensou” (独立戦争), the anthemic arena-rock style debut single released by Saiko Suzuki (鈴木彩子), and, while I wouldn’t rank it as one of my favorites, it’s nice to have something like that in the compilation, since those were the days when Pink Sapphire, Princess Princess (プリンセス・プリンセス) and other all-female rock bands were booming in Japan.

Like I said earlier, even though there’s ‘dance’ in the title, the compilation also offers some slower songs, like Eri Fukatsu’s (深津絵里) beautifully arranged “Approach” (アプローチ) and Iyo Matsumoto’s (松本伊代) “Kanashikute Yarikirenai” (悲しくてやりきれない), which could be seem as something close to a more traditional Kayo song (it’s actually a cover of a song of the same name by The Folk Crusaders [ザ・フォーク・クルセダーズ]). Regarding Matsumoto, long gone were the “Sentimental Journey” (センチメンタル・ジャーニー) days, so she was also way past her prime here, and “Kanashikute Yarikirenai”, one of her final singles, wasn’t even released in 1990, but in the year before, 1989.

“Hohoemi wo Mitsuketa” (微笑みを見つけた) is Noriko Sakai’s second offer, and I like how it comes later on the CD, since it goes well with other mellower songs, like the two mentioned before. Besides Nori P’s cute vocals, I think the nostalgic arrangement combined with the melody results in these type of warm song that connects well with the heart. Unfortunately, though, I can’t give much praise to Kyoko Koizumi’s “Minogashitekure yo!” (見逃してくれよ!), even if acknowledge its quirkiness and fun style. It’s an okay song, but not one of favorites here. In fact, Kyon Kyon got the short end of the stick, since her two featured songs, the other being the slow reggae “La La La…”, were quite weak, in my opinion.

Our final song is “You’re My Life” (ユア・マイ・ライフ) by Yoko Oginome, and I think it’s a good way to end the compilation. Next to Yoko Nagayama’s (長山洋子) “If We Hold On Together” (a cover of a Diana Ross’ song of the same name), which I didn’t include, “You’re My Life” is the most direct American-style song here, and that’s basically because it was composed by an American rock musician called James Christian. Other than that, it does sound like your typical watered down FM rock ballad, and while I have nothing against it, it’s funny to see Oginome pull something like that off. Also, it’s another song that was originally released in 1989, and not in 1990. 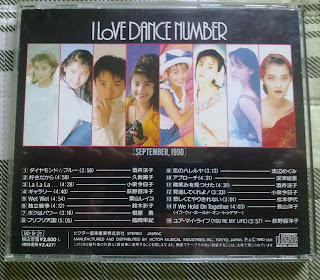