Miki Matsubara -- Dream in the Screen 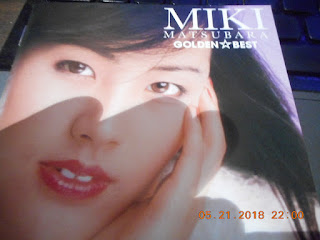 Considering the season, perhaps a perky and pleasant summery City Pop tune might be in order.


So, I have brought in the expert, Miki Matsubara（松原みき）with the final track on her 1981 "Cupid" album, "Dream in the Screen". Not sure whether this was a reply song to Noriyo Ikeda's（池田典代）City Pop "Dream in the Street" which had come out a year or two previously, but "Dream in the Screen" has got its own proud and funky strut down the avenue.

Written by Matsubara and Yoshiko Miura（三浦徳子）with Matsubara also taking care of the melody, "Dream in the Screen", it's all about a woman who's very head-over-heels for her guy stating that she raced out of the house in her lemon-yellow dress so that she can contrast nicely with the fellow's blue shirt. She even states that she would even forego fried chicken to spend her time with him...I've got a feeling that Colonel Sanders was quite understanding about the matter. Man, if I had a girlfriend, there really would be a love triangle among us and KFC!

That's quite a striking cover for "Cupid" with Matsubara in her silk pyjamas on the armchair. Pity how sparse the bedroom is, though.
Posted by J-Canuck at 2:24 PM