I have a thing for hitomi’s 90s singles, especially the trilogy released prior to her second album, “by myself”, from September 1996. One of them is “Sexy”, which was released in February of the same year.

As usual, “Sexy” was produced by Tetsuya Komuro (小室哲哉), but I find it quite different from what he was doing in parallel with Namie Amuro (安室奈美恵) or Tomomi Kahala (華原朋美). Sure, hitomi has always been kind of an underdog if compared with the other two, but probably because of that, and also of the girl’s own input (if she had any), her material has been a little bit more experimental at times (“CANDY GIRL” is pure pop bliss, though). In the case of “Sexy”, I like the funky approach and the weird, almost over the top production provided by TK that distinguishes it from his usual Techno sound. Even hitomi is acceptable here, showcasing a lot of her personality. And she was probably the sexiest girl in the “TK family”, so this song totally suits her.

“Sexy” reached #9 on the Oricon charts, selling around 314,000 copies. Lyrics were written by hitomi herself, while music and arrangement were composed by Tetsuya Komuro. 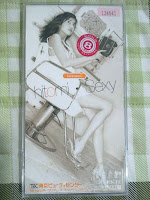