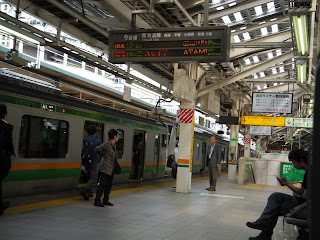 Tonight's theme on NHK's "Uta Kon"（うたコン）was trains. It's quite the meaty theme, actually, since Japan is indeed a train nation with so many railways criss-crossing the country like arteries and veins, and there have been so much in the way of kayo featuring the mode of transportation.


One of the first songs on tonight's show was a 1954 tune by Atsuo Okamoto（岡本敦郎）, a singer who hailed from the great sushi haven of Otaru in Hokkaido. "Kogen Ressha wa Iku" (There Goes the Highland Train) is one of those jaunty postwar numbers celebrating folks enjoying the great outdoors as the titular train passes through. It's so cheerful that it could get even me hiking into the mountains (probably won't happen).


Still, the trains can be fun to ride. Anyways, while most of the song has that happy march feeling, there's an instrumental part in there which seems to take things into a more traditional enka pattern for some reason. Athough I have categorized "Kogen Ressha wa Iku" as an enka tune, I think the tune is basically one zippy kayo.

Toshio Oka（丘灯至夫）wrote the lyrics under one of his pen names which is pronounced the same way but has different kanji（丘十四夫）, while Yuuji Koseki（古関裕而）created the melody. As for Okamoto, he appeared on the Kohaku Utagassen in its very early days a total of 7 times between 1952 and 1958 with his first two times being on the original radio broadcast. He performed "Kogen Ressha wa Iku" on his 4th appearance in December 1954 at Tokyo Metropolitan Hibiya Public Hall. I'm sure that his clap-worthy performance had the audience all roused up.
Posted by J-Canuck at 10:30 PM