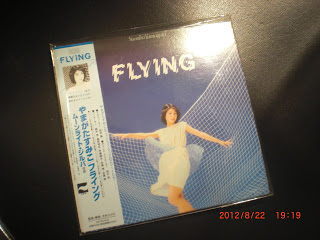 Earlier this morning, all of the telecommunications for the home and, I assume, the neighbourhood went out for about 4 hours or so. In this second decade of the 21st century, it feels rather weird when there is no Internet or phone access, and your television is frozen on the last image before cutting out. That last image, by the way, was of a reporter talking of the latest on Hurricane Florence via CNN.

As such, I had my ramen and fake croissant and milk lunch rather silently (no worries...no running toward the washroom this time), but with the empty time, I realized that I could use it to go over a few CDs. Actually, I just listened to a 45" and then put in the above CD into the stereo...Sumiko Yamagata's（やまがたすみこ）7th studio album, "FLYING" from July 1977.


I've actually written on a couple of other tracks from "FLYING": "Moonlight Jitterbug"（ムーンライト・ジルバ）and "Peppermint Morning"（ペッパーミント・モーニング）with the former being written up in the first several months of this blog's existence. But since I listened to the whole album again today and there are a few of the tracks represented on YouTube, I've decided to go cover the album as a whole.

Track 3 is "Anata ni Teleport"（あなたにテレポート...Teleporting to You）with Ken Sato（佐藤健）providing the jazzy City Pop-lite music of sax and horns, and Takashi Matsumoto (松本隆...who takes care of all of the lyrics in the album) writing the lyrics about what seems to be a first date at a stylish cafe.


Track 8 is the mellow strut of "Yume Iro Glider"（夢色グライダー...Dream-Coloured Glider）with Haruomi Hosono（細野晴臣）composing the equivalent of a fun little jaunt down the street. Blogger kaz-shin of "Music Avenue" pointed out that "Yume Iro Glider" sounds just like a Hosono production, but I also think that there is a feeling of Yumi Arai（荒井由美）in this one as well.


"Tasogare Yuuei"（黄昏遊泳...Sunset Swim）is an interesting one for its kinda Tex-Mex arrangement, and I'm not talking about the food (which I do love, incidentally). There is a bit of that country but also the trumpets from south of the American border adorning this song of having a good time down at the sea. Guitarist Shigeru Suzuki（鈴木茂）handled the music and arrangement here.


Suzuki also took care of "GOOD-BYE Graffiti"（GOOD-BYE・グラフィティ）which has that mix of 1950s jukebox and 1970s mirror ball. I would have said that perhaps "Grease" had indeed been the word for this song, but the movie at least was still a year away, so maybe Matsumoto and Suzuki were inspired by the original play or even George Lucas' "American Graffiti".


The final song here is a bonus track that was added to the CD release of "FLYING", "Plastic Love"（プラスティック・ラブ）. Now, before some of you City Pop folks get yourselves all in a lather, it's not that "Plastic Love", and I'm not playing games here. This is Yamagata's own composition with Suzuki writing the lyrics about a woman catching her boyfriend in a possibly relationship-ending lie. It's a sad story wrapped in a lovely melody, and I think that Yamagata is at her most comfortable singing this particular ballad.

The aforementioned kaz-shin at "Music Avenue" had a pretty major beef about "FLYING" in that he felt that Yamagata was the square peg being hammered into the round hole of non-folk genres. Basically, he thought that Yamagata's vocals didn't quite fit a lot of the songs that she was singing in this album. Admittedly, I also thought that there was something off-kilter about her voice with some of the tracks...maybe a little uncomfortable with the material?

"FLYING" will not be a heavy-rotation CD in my stereo but I think Yamagata does a pretty good job overall, and I will never complain about the 1970s light and mellow arrangement. It's still quite comfy to me.
Posted by J-Canuck at 4:51 PM