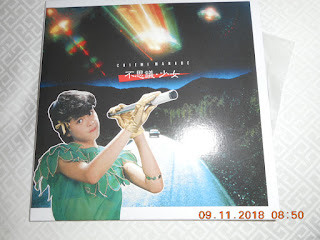 Back in Spring 2014, nikala wrote up a nice article on Techno Kayo as it applied to the aidoru of that time, and one of the people who was included was Chiemi Manabe（真鍋ちえみ）. The song which was included for her was "Nerawareta Shoujo"（ねれわれた少女...Targeted Girl）, her debut single from May 1982. What was striking about it was that dramatic technopop beat and somewhat ominous air to the song. Another interesting point was the combination of the late legendary lyricist Yu Aku（阿久悠）and New Music/Technopop pioneer Haruomi Hosono（細野晴臣）to come up with this song. "Nerawareta Shoujo" was also included in her one and only album "Fushigi Shoujo" (Mysterious Girl) which would be released a few months after that single in August.

Well, for the years since, I had often been wondering about Manabe's discography and the image that had always come into my head was the cover from "Fushigi Shoujo" with her looking distinctly like Peter Pan. I assumed that she had even taken over the role from aidoru Ikue Sakakibara（榊原郁恵）who was quite famous for portraying the boy who never grew up. But although Manabe is listed as a former actress on her J-Wiki file, I haven't seen any indication whether she actually did play Pan. Still, it was fascinating to see this Peter Pan-esque figure singing technopop.


nikala pointed out in her piece that fans of techno kayo had labeled Manabe as the first bona fide techno aidoru. I wouldn't doubt it. Although there were other aidorus who had come out some years earlier with individual singles/album tracks with that technopop sound (such as "Robot" by the aforementioned Sakakibara), I think Manabe's entire short discography consisted of three singles and "Fushigi Shoujo" with all with those bright and perky synthesizers behind her.

Well, I finally got an in on the album when I was able to get my hands yesterday on the CD of "Fushigi Shoujo", thanks to Toshi at the Logic Store. So during my translation work today, I popped it into the stereo and had a listen.

The title track is the track that starts things off (the above video is for the whole album, by the way). "Fushigi Shoujo" was also created by Aku and Hosono, and it also starts off a bit dramatically like her debut single before the synthesizers go on a riff that's reminiscent of The Tokyo Disneyland Electrical Parade.

"Unto Tooku"（うんととおく...Very Far Away）sounds like it's trying to take in some of the more esoteric Yellow Magic Orchestra atmosphere going into the early 1980s. It was written by Akiko Yano（矢野顕子）, who I think deserves to be included at least as an honourary member of YMO for all of her contributions when the band was on tour, and composed by the late guitarist Kenji Omura（大村憲司）. It sounds quite trippy and New Wave with the echoing vocals by Manabe, and that intro would make a great test for a set of headphones. All of those other sound effects as well just keep the ears and imagination busy. 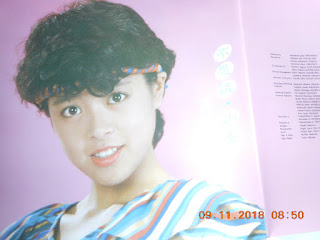 The parade of songwriters who are savvy with the technopop continues on the album with "Good-by Good-by" (37:06 on the album video above) written and composed by Taeko Ohnuki（大貫妙子）. And as with a lot of Ohnuki's songs of the time, it is sweet and sweeping. You can just imagine Manabe at the top of some neighbourhood hill at night singing this to the moon or some other planetary body.


My last song for tonight here is a bonus track that was added to the remastered CD. Titled "Night Train Bishoujo"（ナイトレイン・美少女...Beautiful Girl on a Night Train）, this was Manabe's third and final single from October 1982 that had Aku and Hosono pairing up once more. There's something about the pairing of a piano and a synthesizer that really makes me like a lot of the technopop from this period. I also enjoy the drums and "shrieking" guitar in there as well. For some reason, I think this would have been a nice theme song for a contemporary anime.

Now, for some of the songs, Manabe's vocals aren't the strongest that I've ever heard but as I've mentioned before, a lot of the teen singers in the 80s were given some great support by their songwriters, and I think that's the case with the tracks on "Fushigi Shoujo". And I have to say that it has been a fun trip with this aidoru who was fully embraced by the technopop aesthetic for an entire album (and I got through my work a little faster than usual😁). For those who are interested in the techno aidoru, I think this would be a must-have.