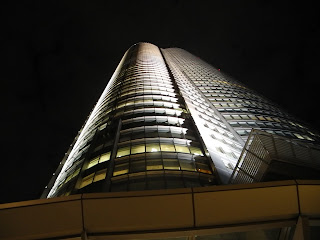 Although as a university student, alternate Fridays were often spent with friends hitting the dance spots in Toronto, when I went to Japan on the JET Programme, basically my evenings of flopping about like Fred Flintstone rather than Fred Astaire came to a rather abrupt end. For one thing, most of my two years on the programme were spent in the mountain town of Tsukiyono in Gunma Prefecture which barely met the requirements of being a town in terms of population (it's now part of the city of Minakami).

Mind you, on the final night of my JET orientation in Tokyo, a small group of us did head out to one of the dance places in one of the Shinjuku hotels. As I remember it, the dance floor was no bigger than a model's catwalk, so the dancing was restricted to some rather intense shuffling (with my moves, I would have been arrested on multiple counts of assault easily). The only other memory I had of dancing during those two years was when some of the English teachers at my schools and I ended up going to some place in the nearby city of Numata which held the somewhat schizophrenic role of disco and karaoke bar...on the same night. I kid you not...it was 40 minutes of karaoke singing and then 20 minutes were given over to the mirror ball and dry ice fog as folks danced as hard as they could for those 1200 seconds. Only in Japan...


Anyways, some time ago, I discovered this City Pop song by cool singer Masaki Ueda（上田正樹）called "Last Foot". The YouTube video has it titled "Just Dance The Night" which I think is a better title, but actually it is part of the lyrics.

A track on his 1983 album "Husky", "Last Foot" starts out with some seemingly heraldic keyboards before the bass comes bombing in to join those happily jangly synths with the familiar soulful voice of Ueda. This can be another fine tune to have on the car stereo while driving through the night streets of Tokyo on a Friday night...hopefully heading to a proper dance club with plenty of room and time to kick up one's heels.

The songwriters for "Last Foot" are Chinfa Kan and Tetsuji Hayashi（康珍化・林哲司）, no strangers to the local urban contemporary music in that decade of high living. And the two also came up with Ueda's most famous song, the soulful "Osaka Bay Blues". Not quite sure what the title is about, but my image is that of the folks at around midnight trying to find an all-night cafe (in Roppongi, that would have been Almond) after hoofing it so much that they had to take off their shoes to give their aching feet a break. Most likely, it would have been too late for them to catch the train or subway since they used to close around midnight...yep, in a world-class city, that was the time for the final commutes home. Things have improved slightly since then...perhaps.
Posted by J-Canuck at 7:55 PM