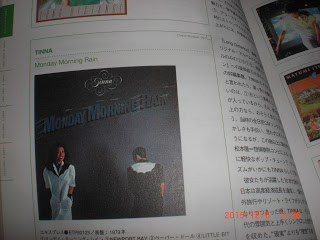 Well, the last day of summer definitely promised us that the season would give us one more blast of heat and humidity before autumn officially arrives tomorrow. And the fall is going to promise its own gift of a high temperature that will be merely half of what it was today...maybe 16 degrees C tops.


Since we're on the topic of weather here, allow me to present some "Monday Morning Rain" by the duo TINNA. I first introduced the teaming up of Tomoko Soryo and Mariko Takahashi（惣領智子・高橋真理子）back in 2015 with their mellow "Shining Sky" from 1976.

From reading up on the small excerpt in "Japanese City Pop", "Monday Morning Rain" was released as a single by TINNA back in 1978 with the titular album coming out the following year. Takashi Matsumoto（松本隆）wrote the lyrics while Yasunori Soryo（惣領泰則）composed the melody brimming with 1970s City Pop flavour.

Now, usually Monday morning rain would be the trigger for some major emotional blues for any commuter heading to work. However, TINNA's "Monday Morning Rain" has got quite the happy kick with the bass, strings, guitars and the vocals seemingly there to cheerfully guide any working cog in Japan to the company. Definitely, something nice to listen to on the old radio.
Posted by J-Canuck at 10:06 PM