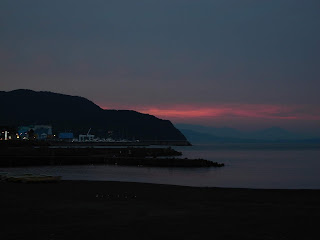 Happy Saturday to you, all! Things were very unseasonably cool today...definitely felt like autumn and only a few days after we went through a Humidex of 42 degrees C! Plus, we'll be getting back to those hot and humid days at the end of next week. So the roller coaster of transitioning seasons begins yet again.


I've been getting into the music of BLU-SWING since I wrote about the title track from their 2015 album "Flash" earlier this year. At this point, I can't get that album since it's either all sold our or whatever is left is being sold at exorbitant prices. Being rather stubborn, I was focusing all of my purchasing energies on that one, but listening to some of their past songs, I'm realizing that getting one of their earlier albums would suit me fine, too.

For example, "Sunset" from their 2013 album "Transit". Commenter roelm and I were talking in the Comments section below "Flash" and wondering about how this particular song would be categorized. Well, on first listen, I have to say that I was fairly wracking my head. Not that anything is wrong with the song at all. In fact, I think it's great and it's great that it can have elements from different genres, and the band itself, as I mentioned in the "Flash" article, covers different musical styles such as hip-hop, Club Jazz and the newer type of City Pop.

I can hear strands of jazz and some electropop and perhaps even some Latin in "Sunset" but in the end, I wouldn't add those categories in the Labels section. Overall, I think it has that funk and soul to place it as a J-R&B number and since I can't help but place it in a soundtrack for walking through Shibuya at night or driving in a car on Van Paugam's highways, I would also give it a City Pop tag as well. But as the video shows vocalist Yuri Tanaka（田中裕梨）walking on the wet sands, I could also imagine it being heard on the deck of a yacht while some party is getting started; there's even that fizzing sound at points in the song which had me thinking club soda being passed around to the happy guests. By the way, roelm also noted that the song had some similarity to an old Chic tune from 1978, "I Want Your Love".

For those who can remember reading some of my thoughts down to an iota, you are probably already aware that I enjoy listening to music that can show facets of different genres in one song. Well, then, welcome to the club, "Sunset".
Posted by J-Canuck at 9:22 PM

Email ThisBlogThis!Share to TwitterShare to FacebookShare to Pinterest
Labels: 2013, BLU-SWING, City Pop, J-R and B, Single