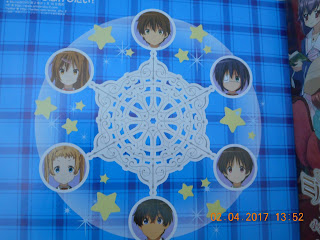 It was a bit like meeting old friends during the biweekly anime session this time around yesterday. Not that I met anyone other than my anime buddy, but what I did see was "Chuunibyo demo Koi ga Shitai! ~ Take on me"（中二病でも恋がしたい! ~ Take on me）, an anime film that had come out earlier this year in Japan. I watched the two original series some years ago, and even then, it was a couple of years after their original broadcast.

The show wasn't a total gag anime or a serious epic adventure but it did have elements of both and a certain sense of adolescent poignancy. Plus, the story seemed to grow beyond the initial premise of the boy Yuta trying to forget his past of eighth-grade delusional fantasy and the girl Rikka sploshing around happily in her present of eight-grade delusional fantasy with friends consisting of enablers and deprogrammers.

On first hearing the title for this movie, I couldn't help but think of an old 1980s pop tune but watching the movie, I realized that this was the finale for the anime franchise which must have gotten a lot of hankies out for the fans at the movie theatre. It was a good end all told with a long-awaited scene finally happening. Plus "Take on me" had that nice cross-country caper as well as Cary and Eva Marie...er, I mean, Yuta and Rikka traveling to places like Tokyo and Sapporo (nice seeing JR Sapporo Station again) with Moe and Curly...er, I mean, Nibutani and Dekomori hot on their trail.


Another "old friend" that I got to hear, actually, was singer-songwriter ZAQ. I haven't heard from her for some time, so it was nice to see her come back to help out with the theme songs in "Take on me". Her most recent single is "Journey" from January 2018 which includes all of the songs from the movie including this one, "Please,Take on me♡" which is my favourite.

ZAQ indeed wrote and composed "Please,Take on me♡", but with the voice modulation and contemporary technopop in there, I was reminded to a certain extent of the Perfume trio. It's nice and catchy and the song was inserted during that montage where Yuta and Rikka were having fun in the nation's capital. Incidentally, there was a clever bit of store naming in that scene when one of the most famous low-priced chains, Don Quixote, was actually dubbed La Mancha in the movie. However, I'm very sure that some actual restaurant or store or something in Japan has that very name. I would also not be surprised if the logo involved a tipping windmill.