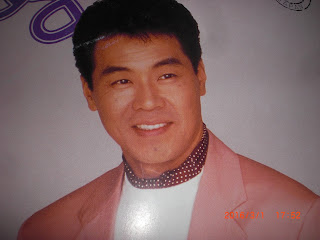 The master was back on "Uta Kon"（うたコン）last night, and continuing on with that theme of train kayo that introduced me to "Kogen Ressha wa Iku"（高原列車は行く）, Hiroshi Itsuki（五木ひろし）sang a song that probably got quite a lot of notice from the introduction by host Shosuke Tanihara（谷原章介）. Apparently, this number by Itsuki hadn't been sung on TV in around 40 years!


"Yogisha no Onna" (Woman on a Night Train) is certainly something different in the Itsuki discography when compared to his enka and Mood Kayo entries. His 15th single in September 1972 was, according to J-Wiki, released as the second example of Pops Enka（ポップス演歌）, following his first attempt in the previous single, the more successful "Matteiru Onna"（待っている女）.

With all due respect to the person who coined the name for that sub-genre, I can't really place anything enka onto "Yogisha no Onna" which I think is much more in the fuzzy rock/funk vein. And as with "Matteiru Onna", I could easily envisage Kenji Sawada（沢田研二）or Akiko Wada（和田アキ子） covering this. Not surprisingly, it was the same duo who had created the latter song behind the former, Yoko Yamaguchi and Takuya Fujimoto（山口洋子・藤本卓也）.

Yamaguchi's lyrics present the usual story of love gone wrong for a woman as she gets on that evening express, but it's surrounded not by the tender enka sound stylings but by Fujimoto's funky downtown arrangement that almost cry for Richard Roundtree as Shaft to rescue the lady from her emotional malaise. Even Itsuki's vocals sound quite different in that his lower tones seem to be almost missing in his delivery.

To be honest, I actually liked last night's performance of "Yogisha no Onna" by Itsuki better than the original since the person who arranged it for him actually oomphed up the 007 aspect by a fair bit (Itsuki...Hiroshi Itsuki). In addition, I was surprised that the singer hadn't sung the song on TV for decades, but perhaps he and the audience had thought this form of Pops Enka was just a little too much beyond the pale for him. In any case, the song hit No. 21 on Oricon and won Itsuki a Japan Record Award for Best Performance.
Posted by J-Canuck at 8:43 PM