Toshinobu Kubota -- You Were Mine 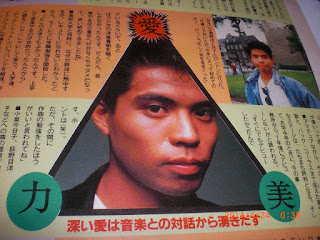 That must have been quite the time for the trendy dramas in the late 1980s when the young characters enjoyed an improbably luxurious life and had jobs that were usually described in katakana such as kopiiraitaa（コピーライター）or dezaiina（デザイナー）.


I found another one of those dramas tonight. Well, it's actually just the opening to be precise, but the credits for "Kimi no Hitomi wo Taiho suru!"（君の瞳をタイホする!...Your Eyes Are Under Arrest!）have that nostalgically goofy Chaplinesque appearance as trendy drama stalwarts such as Takanori Jinnai（陣内孝則）, Toshiro Yanagiba（柳葉敏郎）and Atsuko Asano（浅野ゆう子）clown about (well, the first two actors anyways).


The theme song, "You Were Mine" was performed by none other than Toshinobu Kubota（久保田利伸）who was gaining a reputation as the up-and-coming funky singing dude. Compared with a lot of his later stuff, though, I think "You Were Mine" tends toward the poppier side of things, but still has a goodly dollop of that urban contemporary vibe to it. Nothing like some citified music to launch a show about happy and breezy romantic life in Tokyo. This was his 5th single released in February 1988.

Kubota took care of the music while Masumi Kawamura（川村真澄）provided the lyrics. It did very well on the charts as it made it all the way up to No. 3 on the Oricon weeklies, eventually becoming the 10th-ranked single for 1988. "You Were Mine" was also a track on his BEST compilation, "The Baddest" which was released in October 1989. That album hit No. 1 and became the 2nd-ranked album for 1989, becoming a million-seller.
Posted by J-Canuck at 7:56 PM