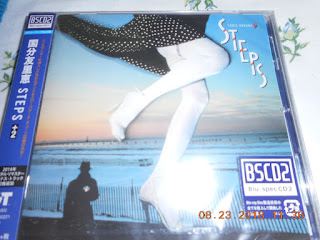 Well, it took me long enough after having read nikala's fine article on the cool and snazzy "I Wanna Be With You" back in 2015, but I finally got Yurie Kokubu's（国分友里恵）2nd album "STEPS" from 1987. It was because that I revisited that article and song, and the amazing cover that nikala had also referred to, that finally got me to happily part with my yen. I guess it could be my interest in the old film noir that had me drawn to that cover of "STEPS": those exposed gams, the man in black with a lamp or lighter and that bleak but beautiful landscape. Last but not least, I really like the font for the title itself.


"I Wanna Be With You" was the second track, but it's "I Got You Inside Out" that launches things for the album, and as nikala mentions in her article, there's quite a bit more oomph when compared to Kokubu's debut effort, "Relief ~ 72 Hours" (1983). I did say in that article that the singer-songwriter was celebrating her party girl days with that one, but listening to "STEPS", it sounds as if she apparently decided to take her party to Los Angeles for a weekend. "I Got You Inside Out" fires off a pretty big missile in that respect. Hitoshi Haba（羽場仁志）took care of words and music and had a hand in all of the songs on the original version of the album back in 1987. 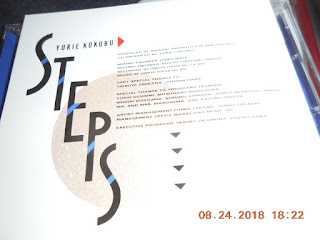 Track 3 is "Cosmic Love" whose amazing keyboards (including that hyper piano) were handled by Masaki Iwamoto（岩本正樹）. I think I mentioned this in a past Kokubu article, but Iwamoto also happens to be the singer's husband, and he was responsible for the arrangements of the tracks in the original "STEPS". It's a great urban contemporary number that would have happily accompanied any aerobics class back then. "Cosmic Love" is another example of how Kokubu kept things within the City Pop/R&B department from "Relief" but took it higher onto the dance floor.


"In Your Eyes" is reminiscent of all of those power love ballads that I heard from acts like Chicago and Whitney Houston back on the radio in my high school/university days. Another Haba creation, this is the song where folks will come out on the floor for the slow dance or just relax on the sofas for a while. I did far more of the latter than I did of the former. Being a nerd helped.


Kokubu wrote the lyrics for "Margarita" to go with Haba's melody here. The track stuck out for me since with that title, I had been expecting something beachside in LA or beachside in Rio, but actually "Margarita" is referring to a young lady who seems to need a bit of help in the love department. I'm not sure but there is something distinctly TOTO-ish about this one especially with that opening piano by Iwamoto. I also enjoy that echoing effect in the refrain.


I keep referring to the original form of "STEPS", and that is because the album that I got has come up with a couple of extra tracks, namely the A and B sides for Kokubu's 1986 single "Nagareru Mama ni~Rikka Ryusui"（流れるままに～落花流水～...Letting It Flow - Mutual Love）. The B-side "Refrain"（リフレイン）is a song that I've already covered on the blog, so here is "Nagareru Mama" which, like its title, flows like a romantically slow river. Tetsuji Hayashi（林哲司）took care of the music and arrangement, and with that slightly melancholy feeling thanks to the strings and flugelhorn, it does feel like a Hayashi-made ballad, and is quite different from the original tracks on "STEPS" and even its B-side (yet Hayashi took care of the funky music while Yasushi Akimoto wrote the lyrics). Kumiko Aoki（青木久美子）provided the lyrics. The ballad was actually the theme song for a 1986 mystery film starring Hideki Saijo（西城秀樹）and Naomi Chiaki（ちあきなおみ）titled "Kizu Darake no Kunshou"（傷だらけの勲章...Scarred Medal）, about a detective investigating the assassination of a company president in Egypt.

Some fine evolution in the music of Yurie Kokubu. And unlike that cover, this isn't a moody or atmospheric album, but it is packed with lots of fun and nostalgic dance pop from the 1980s. 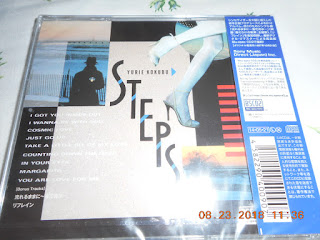