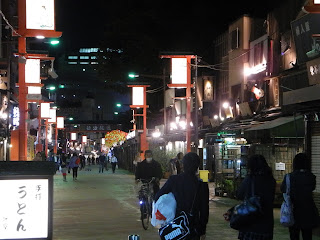 I was watching a recent episode of "Uta Kon"（うたコン）and a poignant enka was performed about a couple of old buddies meeting for the first time in a few years and having a long-awaited drink at a watering hole. Try to imagine back in the early postwar period when Japan was trying to get back onto its feet again with people just trying to regain some of that order from the chaos. I could envision that some friendships may have been detached for several years only for them to be rejoined, perhaps even stronger than ever.

Perhaps that was the point with "Aitakattaze" (Really Wanted To See You) as sung by Haruo Oka（岡晴夫）. According to J-Wiki, this was most likely the final single that was released by the crooner back in July 1955 because illness crept back into his life again (he would pass away in May 1970 at the age of 54). The commentary in that article indicated that this song proved to be another hit for him.


According to the video here, the footage shown of Oka performing "Aitakattaze" was actually from 1970 so the uploader mentions that this may have been the final time of him appearing in front of a camera. Considering the melancholy music by Gento Uehara（上原げんと）and the tenderhearted lyrics by Miyuki Ishimoto（石本美由起）, Oka's performance above takes on an even more enhanced poignancy.
Posted by J-Canuck at 9:11 PM