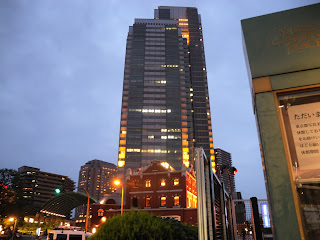 I actually saw actress/singer Rie Tomosaka（ともさかりえ）on today's edition of NHK's "Asaichi"（あさイチ）so I wondered about covering one of her old songs from the 1990s.


Back in that decade, I knew Tomosaka primarily for her role as the first incarnation of Miyuki Nanase（七瀬美雪）, the foil to Hajime Kindaichi（金田一 一）, the genius teen detective in "The Kindaichi Case Files"（金田一少年の事件簿）as first played by one half of the Kinki Kids, Tsuyoshi Domoto（堂本剛）. Then I heard that she was going to release her first single, and it seemed like at the time that any teen star who makes it big was pretty much obliged to record at least a few songs.

Tomosaka's debut single was "Escalation", and actually, I was surprised to find out that she wasn't too bad at the singing game. Plus, it helped that the music provided by M. Rie had that touch of light funk. I wouldn't say it was urban contemporary but it was pop that had a bit more pop in it. Yasushi Akimoto（秋元康）wrote the lyrics about a budding love that has sort of popped up all of a sudden between two friends. I think what also struck me about the song was Tomosaka's vocals which have that certain sultriness or silkiness.


"Escalation" was released in April 1996 and it peaked at No. 8 on Oricon. Now that I've seen her again on television today (she occasionally appears on "Asaichi"), I have to remark that Tomosaka hasn't really aged at all since her teen years.
Posted by J-Canuck at 10:24 PM