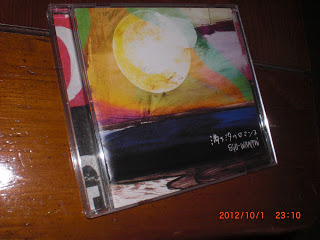 'Tis Hump Day...stress levels may be at their highest tonight, so allow me to provide a bit of a nice cool down song.


Heck, the term cool down is even included right from the get-go in "Oibore Inu no Serenade" (Old Dog Serenade) by jazzy Ego-Wrappin'. Included as a track in the duo's 3rd full album "Night Food" from July 2002, vocalist/lyricist/composer Yoshie Nakano（中納良恵）and guitarist/composer Masaki Mori（森雅樹）weave a mellow but sexy ballad about what seems to be a walk in the rain, although the atmosphere feels like a more intimate basement jazz club (I'm thinking DUG in East Shinjuku) with brick decor, whisky glasses and cigarette smoke slowly curling up to the ceiling.

"Oibore Inu no Serenade" goes most of its sultry way until the last couple of minutes when Mori and the rest of the musicians go into an intense riff to finish things off.


The music video just has Ego-Wrappin' and a guitar out in the countryside, but the song was apparently titled back then "Oibore Inu no Kuchibue"（老いぼれ犬の口笛...Old Dog Whistle）which is actually used in Nakano's lyrics. Either way, this is another fine number to listen to while relaxing on the sofa with a good stiff drink with plenty of ice. However, I have to admit that I enjoy the music video version even better since it maintains that calming mood all throughout. Indeed, it is night food for the soul.

Speaking of the album, "Night Food" managed to get as high as No. 5 on Oricon, and then took the long way around to become the 60th-ranked album for 2003.
Posted by J-Canuck at 7:59 PM