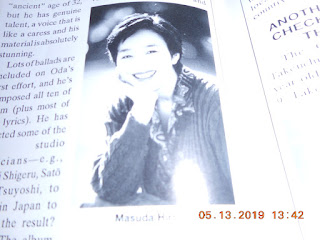 It's been a while since I've put up this sort of kayo, but in the past, I've found that there were some of the old songs which had some happy and cheerful music alongside some sad lyrics. Basically, the moral of the story was that one not only has to keep that upper lip nice and stiff but that lip also has to be a part of a big smile, no matter how bad the situation. Maybe one of the better examples is Kyu Sakamoto's（坂本九）"Ue wo Muite Arukou" (上を向いて歩こう), aka the "Sukiyaki" song.


Well, I found one of Hiromi Iwasaki's（岩崎宏美）earlier songs from her February 1976 2nd original album "Fantasy"（ファンタジー）. Titled "Hitoribocchi no Heya" (Lonely Room), it's another wonderfully delivered 1970s Iwasaki tune with a bit of light funk by Yusuke Hoguchi（穂口雄右）, and not thinking too deeply about the title, I had assumed that it was another happy-go-lucky number of being in love. However, Yu Aku's（阿久悠）lyrics relate a young devastated girl holing up in her bedroom due to some adolescent frustration about a boy that she likes. It's quite dark, actually...looking at those lyrics makes me wonder if she is heading into hikikomori territory. But hey, it's still a bouncy tune.

The album "Fantasy" also contains her 3rd single "Sentimental"（センチメンタル）and the title track which was her 4th single. I was surprised to find out that I have yet to write about that one so I will have to rectify this next month. "Fantasy" the album hit No. 2 on Oricon and became the 32nd-ranked album for 1976.

Actually, there is another "Hitoribocchi no Heya" sung by Masa Takagi（高木麻早）back in 1973. I had wondered why in researching about Iwasaki's "Hitoribocchi no Heya" the title sounded so familiar, but Takagi's song is very different in that it's a very folksy number and the lyrics are also much happier in tone.
Posted by J-Canuck at 7:59 PM