Well, it was a pretty banner night on tonight's "Kayo Concert"（歌謡コンサート）. The theme was Mood Kayo in Fall, and although I didn't really detect anything autumnal about the songs selected, it was still the urbane and comfy music of my childhood on display on the NHK stage.

The stage was indeed set when the show opened up with old footage of the bright lights and big city of Tokyo along with scenes of the bartender shaking up a martini and a couple tripping the light fantastic on the dance floor. A number of the classics that have already been covered in this blog were back, but my ears also caught another number that I hadn't heard in a long time and had yet to feature on "Kayo Kyoku Plus".

"Uso yo Konya mo" (More Lies Tonight) is a flirtatious duet number (in Mood Kayo, what other type of duet can there be?) featuring Los Indios & Silvia who had an even more successful hit with "Wakarete mo Suki na Hito"（別れても好きな人）from a couple of years earlier. They were back again in 1981 with "Uso yo Konya mo", written and composed by Shigeaki Mutsumi（六ツ見茂明）, with some magnificent strings and a cute back-and-forth between the woman and the guys as they portrayed a charming cad not giving up on that beautiful lady with the latter not playing too too hard to get.

As soon as I heard the "Sukisa, dai sukisa..."（好きさ、大好きさ...I love you, I really love you）, my memory started firing up in recognition. The only places I could imagine this banter happening in would be Ginza or Akasaka, the perfect Mood Kayo settings. Usually, when I think of the genre, the 50s and 60s would be the decades I get reminded of, but it's nice to know that it was able to go farther into the century.

1981 was also the year that my classmates and I went on that graduation trip to Japan. And on my second night in Tokyo, one of the boys' host family swung by the Tokyo Prince Hotel to take him, myself and one other guy out for dinner. As I recall, we didn't take a taxi or a subway so I figure we must have ended up in nearby Daimon at a tonkatsu restaurant in one of the underground malls. It was a fine dinner but when the three of us offered to pay our share, the host father somehow had the wherewithal to throw all of us strapping young lads out the door. That is what I call being treated to dinner. And for the first time, I felt like I was getting into the swing of things in the evening of this most epic metropolis. Daimon may not be Ginza or Akasaka, but to me, it more than made a great impression....perfect for a Mood Kayo to be a theme song. 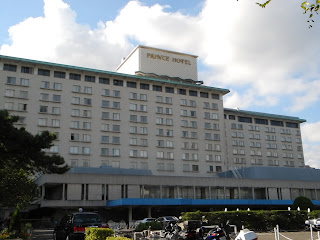