Though I discovered KAN early on in my Japanese music escapades - he was the first other singer I tried listening to besides Chage and Aska - I don't listen to him all that much. In fact, it had been quite a long while since I touched any song related to him. It was only within the last couple of days when I had the urge to revisit "Yoteidori Guzen ni" (予定どおりに偶然に), a collaboration between him and C&A's ASKA, did I finally hear the preppy-looking singer-songwriter's somewhat high and pleasant vocal delivery again.

While enjoying the jaunty tune that is "Yoteidori Guzen ni", I was sifting through the suggested videos part of the page in order to find something else by KAN, and that was when I came across "Yokereba Issho ni". I took a liking to this song immediately upon hearing it's breezy, laid-back style that is comparable to the feeling of taking a leisurely stroll on a Sunday afternoon. And what made me appreciate it more was the meaning behind it. As I found out online, "Yokereba Issho ni" translates to something on the line of "Would you like to come along with me?", so I'm guessing that's what the song is about: the fellow thinking that it would be more of a joy if this particular person (KAN's lyrics did not really specify, so it could be that special one or just a friend) were to join him on his journey through life. It sounds like a good theme song for a couple of the anime I watch, like "Natsume Yuujincho" (夏目友人帳) or "Shirokuma Cafe" (しろくまカフェ) where the theme of friendship is evident.

I wonder why he's dressed as a cop/security guard...

"Yokereba Issho ni" was KAN's 32nd single, released on 10th February 2010. It did alright on the Oricon charts, peaking at 49th place. 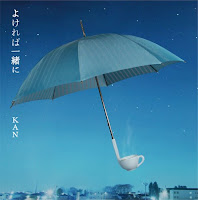 Just as a side note here, but I think KAN's voice is really suited for sweet, feel-good songs like this.
Posted by Noelle Tham at 11:31 AM