For some reason, I had thought that this particular track "Amiageta Yume" (A Woven Dream [?]) was on one of my Miho Nakayama（中山美穂） CDs, "Mid Blue", but as it turned out, it was on her previous original album, "Pure White" (1994) that I do not have. I gather that I must have borrowed it from a friend and then taped the song because that is my only source at this point. 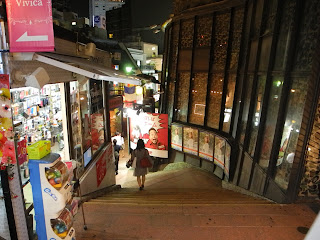 In any case, "Amiageta Yume" may not have been an official single but it is a song that still stands out in my memories of Miho because of those dynamic horns. In fact, every time I hear it I just think of young folk literally bounding down Spain Zaka in Shibuya on a Friday night. Yup, the photo above is of the slope that is lined on either side with more shops and restaurants. Makes for some interesting shots.

Composed and written by two of the members from the band Flying Kids, Takashi Hamazaki（浜崎貴司）and Kazuo Fukushima（伏島和雄）, with Miporin also working on the lyrics, the song sounds as if it were suited more for Kahoru Kohiruimaki（小比類巻かほる）, but hey, I'm also OK with Miho. I just like all of the urban craziness that seems to be happening as the song is plowing ahead. As for the album, "Pure White" managed to peak at No. 3. 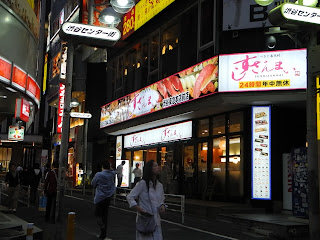