A few nights ago while hopping from video to video and sampling some classic Mood Kayo I hadn't yet listened to on YouTube, I came across a familiar name, Shinichi Sasaki, and I recognized its song title to be that of his most successful single from way back in 1966, so I went ahead to check it out.

As I was greeted by the dashing lad you see up there and the quick tempo of "Ano Ko Tazunete", I actually forgot that this was the same Sasaki that sang "Hana Yome Toge" (花嫁峠) decades later until his high, nasally voice was heard - my brain has been programmed to expect a mellower vocal delivery upon hearing this sort of bossa nova music. It came as quite a shock really, that Sasaki, who sounds right at home with a traditional enka tune, would tackle something as snazzy as "Ano Ko Tazunete". Though it felt odd at first, I soon got used to it and found myself taking a liking to his delivery of the song. Now I wonder what it would be like if someone like Yujiro Ishihara (石原裕次郎) were to cover it.

Besides Sasaki's Minyo-esque voice, what gave "Ano Ko Tazunete" an enka vein was Hiroshi Nagai's (永井 浩) lyrics. They seem to be about our lead man here wishing he could meet up with the girl he likes again, and he brings this feeling to the places that are frequently mentioned most enka songs, that being Tokyo, Osaka, Kagawa and of course there are shout-outs to various landmarks in the said prefectures like the Imperial Palace. Composing this song was Sasaki's mentor, Seiichi Sakurada (桜田誠一).

As I mentioned earlier in the article, "Ano Ko Tazunete" was Sasaki's biggest and breakthrough hit, and it became a million seller. 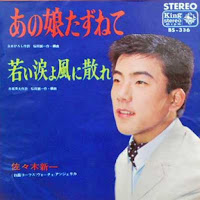