During that part of the 1990s that I was in Japan, I became accustomed to hearing about the various acts coming out from Okinawa, and usually my impression was that they were either performing the distinct folk music featuring the sanshin or kicking it up a notch with some high-energy dance pop (a la Namie Amuro and Speed).

Then came Kiroro, a duo consisting of Chiharu Tamashiro and Ayano Kinjo（玉城千春・金城綾乃）, high school buddies from the Nakagami District of Okinawa who made their debut under an independent label in late 1996 with "Nagai Aida"（長い間...A Long Time）before making their major label debut in early 1998 with the same song and hitting No. 1. My visual impression of the two was seeing Tamashiro standing behind the mike while Kinjo was providing the steady hand at the piano, and thanks to their big hit with "Nagai Aida", I always saw them as a pop ballad duo, especially with Tamashiro's angelic voice.

However, Kiroro's 5th single from June 1999 was "Saigo no Kiss" (Final Kiss), a sunny number which reminded me more of Dreams Come True on a fun vacation in terms of melody. Tamashiro wrote and composed the song that may not have reached the heights of their debut single, but it was fun enough for me to purchase the CD. It peaked at No. 12 on Oricon, and was placed as a track on Kiroro's 2nd album, "Suki na Hito: Kiroro no Sora"（好きな人〜キロロの空〜...The Person You Love - Kiroro's Sky）which was released in December 1999 and hit as high as No. 5 on the album charts.

I'm not sure how many ads Tamashiro and Kinjo did but I also remember that they also had their share of the limelight in the interview sessions of the music programs and even perhaps as guests on the variety shows. The two came off as being quite giddy and more than willing to have a good time with their hosts. 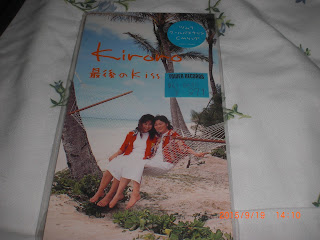