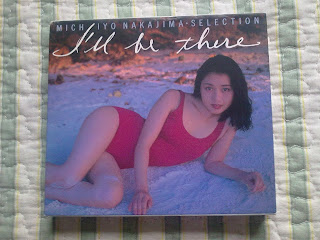 Recently, I bought a Michiyo Nakajima (中嶋美智代 / 中嶋ミチヨ) best of called “Nakajima Michiyo Private Selection I'll be there”, which was released in December 1994. I’m not the biggest fan of Nakajima’s work, but the CD cost me very little, so I couldn’t resist buying it. Also, the CD came with all the nice “souvenirs” that are common in the Japanese aidoru industry, such as a gorgeous slipcase featuring Nakajima posing in a swimsuit (picture above) and a 64-page photobook. So, paraphrasing KC and the Sunshine Band’s 1975 hit, that’s the way I like it!!!

Michiyo Nakajima was an aidoru that came out of a big girl group called Otomejuku (乙女塾), which was part of a TV show called Paradise GoGo!! (田代まさしのパラダイスGoGo!!). Their goal with Otomejuku was creating a return to the old aidoru aesthetic, something that was being abandoned by the music industry in the late 80s/early 90s. Simply put, Paradise GoGo!! didn’t want to let the golden aidoru days die, so they “assisted training for girls to become talents from 1989 to 1991” (source: generasia.com). It was basically the same thing Tsunku (つんく) fought for when he created Morning Musume (モーニング娘。) and Hello! Project (ハロー!プロジェクト) in the late 90s.

Based on the premise of not wanting to let cute aidoru vanish from the public view, Paradise GoGo!! created the flagship aidoru group CoCo, some sister groups like ribbon (before deciding for a solo career, the powers-that-be actually planned that Nakajima would debut as a ribbon member back in 1990) and Qlair, but also a couple of solo acts, such as Michiyo Nakajima and Yuko Hanashima (花島優子), to name a few. In addition, CoCo’s members also started solo careers, with varying degrees of success, while still working in the group. The only exception was Azusa Senou (瀬能あづさ), who left CoCo to focus only in her solo career.

Michiyo Nakajima, at least during the first years, when the CoCo girls were still only tied to the group, was probably the main soloist from the whole Paradise GoGo!! series of aidoru acts (Yuko Hanashima debuted first, but her career as a singer didn’t take off. You can read my article about Hanashima’s main song here). Her work is a direct throwback to aidoru’s standards with the baby-like voice and some melancholic pop ballads. In a way, just like J-Canuck commented on my past Michiyo Nakajima article, “her appearance and vocals strikes as being quintessentially aidoru...very adorable”.

I’ll not lie and say Michiyo Nakajima is one of the most interesting aidoru singers out there, but I think her songs worked quite well in this sort of limbo when the whole aidoru thing was in commercial decline. From the fourteen songs included in the compilation I have in my hands, I selected five that encapsulates her overall sound in its best. Although we could count it as the sixth track from my selection, I’ll not talk about her debut song here, as I’ve done an article covering it in the past. However, keep in mind that “Akai Hanataba” (赤い花束) is also an essential song in Nakajima’s discography, so, if necessary, go listen and read what I wrote about it here.

The compilation kicks off with “Koi wo Shimashou” (恋をしましょう), Nakajima’s latest single at the time.

Released in July 1994, it’s an upbeat aidoru tune with a memorable synth hook the comes right at the beginning. It also showcases a light rock vibe that worked quite well with the peppy aidoru chorus. Honestly, I think it’s my favorite from her more upbeat songs, even though there aren’t many of them to choose from in the first place (at least in the compilations I’ve heard so far).

Now we have “Totemo Chiisana Monogatari” (とても小さな物語), a song that was released in September 1991. Unlike “Koi wo Shimashou”, this one sums up what a call Michiyo Nakajima’s signature sound, a sentimental and melancholic aidoru pop sound with heavy usage of keyboards and synths in a very 80s vein. Even though I quite like it, nothing really stands out here, and that’s the reason why I decided to not include other songs of the same type. And believe me, there are a lot of them in Nakajima’s discography. In the end, if there’s something positive about this type of song is that it surely evokes nostalgia.

The next song I bring to the table is “Hinageshi” (ひなげし), which was actually Nakajima’s sophomore single from April 1991. In fact, I find it quite similar to “Akai Hanataba”, her debut which got released three months earlier. Maybe it’s the flower-related titles that both have in common, but the similarity is not a bad thing, as “Hinageshi” somehow succeeds in becoming a memorable song in the girl’s discography, just like its predecessor. I especially like the arrangement with the fake strings, which are probably just analog synths, and I think “Hinageshi” could have been a Seiko Matsuda (松田聖子) song with no big estrangement.


My next song is “Koko ni Iru Kara” (ここにいるから), a song that was not a proper single, but the coupling song to “Nikki no Kagi Kashimasu” (日記の鍵貸します), Nakajima’s sixth single, released in May 1992. Ironically, “Nikki no Kagi Kashimasu”, actually a boring aidoru ballad, didn’t appear in this compilation, but I’m not really complaining, as I consider “Koko ni Iru Kara” a more interesting song if compared to the one it was coupled with.

Before listening to this album, I had never heard “Koko ni Iru Kara” before. Based on that, it was probably the best surprise I could come across at the point. I’ll not lie and say it’s a brilliant song, because, in reality, it’s just a formulaic pop song that also evokes some nostalgic feelings. However, I really like the arrangement of this one with all the “icy” keyboards and some crude synth sounds that I just love to hear. Although far from a true upbeat song, the steady medium-paced beat is a nice feature if we consider Nakajima’s past works.

My last offer today is “Hazukashii Yume” (恥ずかしい夢), which was released in January 1993. Don’t ask me why, but the beginning is quite intriguing with the house/dance introduction. However, as we quickly acknowledge, it becomes another typical Nakajima song, although I agree that the pace is a little bit faster than normal here. Actually, “Hazukashii Yume” is one of my personal favorites thanks to its melody. I especially enjoy when Nakajima sings “hazukashii yume mo miruwa tokubetsuna kotojanai mono” (恥ずかしい夢も見るわ特別なことじゃないもの) just after the chorus.

Summing things up, I never really thought of Michiyo Nakajima as an outstanding aidoru. For me, nothing about her is very memorable. Neither her look or her songs. However, it’s precisely this “blank” thing about Nakajima that I think is one of her main selling points. I can really see her as a “girl next door” instead of a true singer or celebrity, and that’s what aidoru, at least in essence, is all about. Her plain, yet easy-listening and pleasant pop ballads, also works in the same way, even though they were only minor hits at the time.

In the end, I’m happy to have Michiyo Nakajima’s compilation. I confess it’s probably enough for me, as I don’t see how her two studio albums could introduce me to greater things than what I was able to find in “Nakajima Michiyo Private Selection I'll be there”. With that in mind, I always listen to Nakajima’s songs with a very unpretentious feeling, athough a truly confortable one.

Just as a quick side note before finishing this long post, when I was taking some pictures of the album to include here, my father entered the room and asked me why the girl was posing in a swimsuit for the CD cover. According to him, the main point of the CD is to sell music and not to show a girl doing model work. I just answered it’s how things works in Japan and we ended laughing together with no apparent reason. After he left the room I thought to myself: my father really doesn’t know nothing about aidoru industry, even after all these years taking subtle looks at my videos.