I was doing some more rifling through Dad's ol' collection of 33s and 45s when I came across an old single by the late Michiya Mihashi（三橋美智也）from 1964. The A-side is "Yoru no Buranko"（夜のブランコ...Night Swing）which I couldn't find anywhere on the Net, but strangely enough, I could track down the B-side "Ako to Guitar to Uramachi to" (Ako and a Guitar and the Back Streets).

The old 45 was written by Ryosaku Yano（矢野亮作）and composed by Toshio Shiraishi（白石十四男）, and I couldn't quite peg whether the ballad was in the enka or Mood Kayo territory. I'm tending toward the Mood Kayo side of things since it is about Mihashi as this lone wolf guitar-toting balladeer seemingly continuing on his endless quest walking through the dimly-lit byways of the drinking establishments, the prime environment for such a song although these places seem more solidly working-class rather than the high-priced bars of Akasaka or Ginza. Also, the somewhat mournful horns and the guitar backing Mihashi up sound appropriate for musical accompaniment in some swanky nightclub.

Although I never saw this sort of person with my own eyes walking through the seedier areas of Shinjuku or Shimbashi during my years in Tokyo, apparently there were (and perhaps still are?) these balladeers who would be plucking away at their guitars singing the sad songs in the nomiya-filled back streets as they leisurely did their walk and occasionally popped into one of those watering holes fulfilling any requests by the customers. I always saw these folks pop up on variety shows from time to time. The particular balladeer in "Ako to Guitar to Uramachi to" seemed to be hell-bent on carrying out his life's work even at the sacrifice of any potential romance with Ako. The story almost sounds ideal as a movie with the final scene of The Balladeer walking away from the camera and down the deserted bar alley into the bright glare of the neon lights before it consumes him. The End. 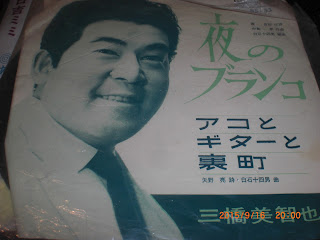