For those who already miss the summer, I will have to apologize and warn you in advance since I've got something very summery for this article. Kengo Kurozumi（黒住憲五）is a name that has popped up in front of my vision during my many looks through "Japanese City Pop", but until the last few days, I never had the opportunity to listen to his music.

Well, thankfully, there are a few videos of Kurozumi music on YouTube that I discovered. And I came across this Resort Pop gem by him, "Pastel Love" which is a track on his 1982 debut album, "Again". I couldn't find the exact credits for this particular tune but since he is listed as a singer-songwriter, I assume that he was also responsible for its lyrics and music. In any case, this song paired with the lovely beach scenes will probably have lovers of the hot season crying in their frosty mugs of beer. Having often suffered through Tokyo summers, I'm not such a fan (although I've been faring much better with Toronto summers), but hearing that ol' 80s electric guitar, Kurozumi's vocals and the synths, I got rather nostalgic. Plus with that title, I got reminded of all of those pastel colors that were really popular on fashion back then....aka the TV series "Miami Vice".

Kurozumi was born in Okayama Prefecture and is listed as a J-AOR singer-songwriter according to J-Wiki. He attended Aoyama Gakuin University in Tokyo, before becoming the vocalist and drummer for the band Boomerang in 1973. The band broke up a year later and he became a solo act, releasing his first single, "Ushiro kara Ame ga"（後ろから雨が...The Rain Came In From Behind）in 1976 and becoming a supporting member for the session band Camino. Another singer to peruse. 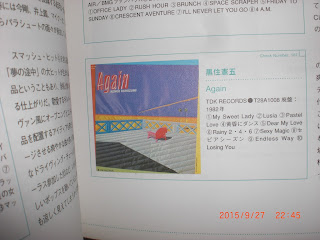