Well, it's almost been a year since I've written an article on ALFEE. Welcome back! I think the last one I did about them was their debut "Natsu Shigure"（夏しぐれ）from all the way back in 1974 when they were known as ALFIE.

"Kiri no Sophia" (Sophia in the Fog) is ALFEE from their full-throated glory days in the 80s. It was their 21st single from October 1985, and it's actually the first time I've heard it. Written and composed by the dandy member of the trio, Toshihiko Takamizawa（高見沢俊彦）, with Ken Takahashi（高橋研）co-writing the lyrics, it's Takamizawa singing and mourning about the loss of his beloved Sophia as he still can't let go of her while remembering about their last dance together on that foggy night.


The music shifts slightly between urgent and wistful as ALFEE does what it does best and provides some power pop/rock to the concert masses. Whenever I hear one of their epics from this decade, I always envision some sort of sword n' sorcery video game for some reason. The single peaked at No. 2 on Oricon, and was first placed on their 1985 BEST compilation "The Best Songs". 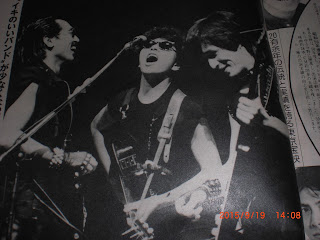