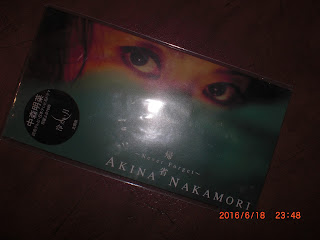 Japan has already entered Wednesday July 13th 2016 so this is as good a time as any to wish Akina Nakamori（中森明菜）a happy 51st birthday. I hope she is doing well wherever she is on the planet. Of course, if she is still endeavoring to provide music to her fans, then power to her. However at this point, as an old fan of hers, I will just settle for the good wish that she is staying healthy since she seemed so frail when she has made those rare appearances on TV.

I've been asked by a few people who know that I was the big fan of hers when she made that transition from popular aidoru to pop superstar during the 1980s why I wasn't too cognizant about her works since the 1990s. Well, in all honesty, I frankly didn't hear from her all that much since that big comeback in 1990 with "Dear Friend", and that included the time after my arrival back in Japan at the end of 1994. She did release singles and albums but the buzz for them was far lower than during her 80s heyday, and of course, there were a lot of new hit singers and bands hitting the mass media at the time including all those under the Tetsuya Komuro（小室哲哉）umbrella. Plus, what I did hear from her struck me as being a little too maudlin for my tastes, compared to some of the dynamic hits that she'd had the decade before.


However, there was one ballad that stood out for me, and that was released near the end of the century. "Kisei ~ Never Forget" (Homecoming) was Akina's 35th single from February 1998, and it was the theme song for an NTV drama titled "Tsumetai Tsuki"（冷たい月...A Cold Moon）that she co-starred with former aidoru-turned-actress Hiromi Nagasaku（永作博美）from Ribbon which had a 2-month run between January and March of that year. It was Akina's first drama in several years since her starring role in "Sugao no Mama de"（素顔のままで...Just the Way You Are）in 1992 as a young lady from the wrong side of the tracks aspiring to become a dancer, and the show was compared to the movie "Beaches" with Bette Midler and Barbara Hershey.

"Tsumetai Tsuki" was also, at the very least, inspired by another Hollywood flick called "The Hand That Rocks The Cradle" which I did catch at the theatre with friends, not long after I had returned from the JET Programme. I also saw the pilot episode for "Tsumetai Tsuki" and just wondered whether Rebecca DeMornay had given Akina-chan some hints for her character who is definitely a whole lot more unhinged in this show. Definitely the opening credits were notable for having the protagonist and antagonist playing dead in all sorts of scenes. Looks like the tone was set right then and there.


And man, "Kisei" was a song that reflected the mystery and sinister intent of the series. What got me to buy the ballad was the keyboard intro and those shimmering strings which seemed to hint at a gothic horror. Then there were Akina's vocals which really hit the lower registers and had that truly haunting quality. She may have been channeling her doomed character from "Tsumetai Tsuki" after all was said and done as a ghostly cautionary tale, warning all those who would follow in her footsteps of vengeance.

"Kisei" was written and composed by singer-songwriter Yasuhiro Suzu（鈴康寛）while atsuko also co-wrote the lyrics. It did fairly well on Oricon, getting as high as No. 19 and was also a track on Akina's 18th album, "Spoon" which came out in June 1998, peaking at No. 17. 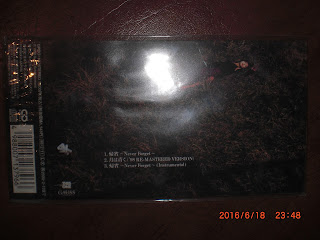