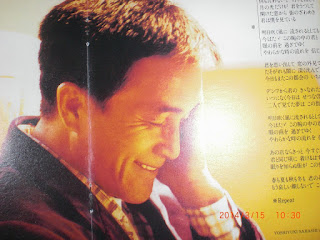 Although my excitement at the time was understandably all focused on starting my very first post-university job in a foreign country and finally living life on my own, my bona fide collection of Japanese pop music started with my arrival in Gunma Prefecture for the JET Programme. I wasn't aware of it at the time, but years of owning a few LPs and tapes bought in Chinatown and taping episodes of "Sounds of Japan" would transition into a ravenous habit of purchasing tons of CDs in Tsukiyono-machi, the regional capital of Maebashi and the megalopolis of Tokyo over the next two years.

Looking back on those years and then comparing them to that July 1981 trip which launched my musical journey in the first place, I find it fascinating at how different music was between the beginning of the 80s and the end of that decade. The scene of fluffy-cute aidoru in frilly dresses and questionable bridgework had changed into a small cadre of mellow singer-songwriters in tandem with girl bands who wanted to rock out with their guitars or their voices. Plus, there was even more synth work but not to show off any blippity-bloppity technopop but to anchor songs in a somewhat more mature style.

When I moved into my room atop my host family's chiropractic practice, I turned on my TV and saw Yoko Oginome（荻野目洋子）, the super-dynamic aidoru of the mid-80s simply acting away in a drama. Things were indeed a-changing. In any case, I welcome you to Part III of the series.


Being blasted awake every morning by "Bad Communication" by B'z made sure I was aware of this band. B'z was part of the realization that I was no longer in kayo Kansas. Koshi Inaba and Takahiro Matsumoto（稲葉浩志・松本孝弘）were the introduction to the part of J-Pop that was now in full thrall to more eclectic bands.

I had to find out from one of my English teachers in class about who Kazumasa Oda really was. On finding out that he was that distinctly mellow voice on many an Off Course (オフコース) ballad, it was a revelation on how urban contemporary he became as a soloist. "Little Tokyo" was the template sound to me for this new Oda who was already turning out to be one of the coolest middle-aged guys in music.


My impression between 1989-1991 was that the old-style aidoru phenomenon was finally starting to peter out. And yet, when I arrived, the Wink duo of Sachiko Suzuki and Shoko Aida（鈴木早智子・相田翔子）had already made a huge splash with a style that seemed anti-aidoru: no bopping about and no emotion. Just near-robotic moves and expressions reminiscent of exquisitely handmade dolls. "Samishii Nettaigyo"（淋しい熱帯魚）is the song that I will always remember them for.


Speaking about anti-aidoru, Mariko Nagai may have had plenty of bopping dance style but I couldn't ever see her as an aidoru. There was a cuteness to her, to be sure, but not of the early 80s calculated variety but something that was far more girl-next-door and down-to-earth. In many ways, "Miracle Girl"（ミラクル・ガール）is the one representative song that symbolized the female pop sound of those years in Gunma.

I already knew about Misato Watanabe while I was still an undergrad at U of T but spending the turn of the decade in Japan, I got to know far more about her thanks to the hit singles (such as "Summertime Blues") and albums that came out during my time there. And "Summertime Blues" was another one of those happy songs that also signified my 1989-1991 period.

If it hadn't been for that stopover at that comfortable lodge cafe between Maebashi and Tsukiyono, I may not have been able to discover the wonders of Miki Imai. Well, that's not true...the lady with the mile-wide smile was already gaining so much popularity that I would have found about her eventually. But that cafe setting while hearing the relaxing sounds of her "Natsu wo Kasanete"（夏をかさねて）pretty much imprinted my falling for the lass. A lot of girl spunk out there but Imai was lovely and mellow.


There was no place to avoid Princess Princess and the band's megahit "Diamonds". The very happy song was all over media and it was already a favourite tune to play during the schools' Sports Day outings. Girl pop/rock was all the rage at the time I arrived in Japan and Princess Princess was the band to beat.


Noriyuki Makihara broke out just a month before I was to leave Japan for home. But his "Donna Toki mo"（どんなときも）was so infectious and positive that I simply had to obtain the CD single before getting on that last plane home for Canada. And I finally got it in a department store in Kumamoto City. It may have been the first disc that I ripped open on getting back to my family's condo.

Although the above are my standout singers, there were so many others who together with those above trailblazed a new path into Japanese popular music, and things got more interesting when I returned to Japan a few years later for a far longer stay.
Posted by J-Canuck at 3:02 PM