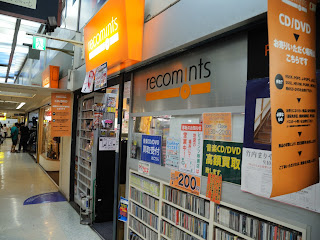 I was answering a query from Noelle just now when I decided to take a look at how some of my old CD-hunting haunts were doing. And sad to say, one of my major destinations in Tokyo, Recomints, has gone the way of the dodo and the passenger pigeon. I looked up the website to find out that the used CD store closed up shop for good in April 2016.

When I visited Tokyo in late 2014, the store was still there (that is the photo I took at that time) at Nakano Broadway, albeit a little smaller than it used to be when I was living there full time. However, as they say, all good things must come to an end, and so was the case with Recomints. So my articles "Recomints in Nakano Broadway" from 2012 and "Revisiting the old shops" from 2014 will now have a more elegiac quality. She was a good shop.

At this point, I'm not sure if there is an equivalent CD store in the massive Nakano Broadway complex but I can still wholeheartedly recommend Broadway for all those who are interested in taking a time trip backward into the Showa Era whether it be models, manga & anime or even restaurants. And the place now has a fairly good English-language website.

I had been thinking about just inserting the news as a PS in one of the other two articles I mentioned but for a place that I once coveted monthly, I felt it deserved its own article.
Posted by J-Canuck at 5:05 PM