This morning on "NHK News at 9", there was an unexpected feature on the late Yu Aku（ 阿久悠）, the prolific lyricist of the Showa Era who I've equated as the Japanese version of Ira Gershwin or Irving Berlin. It has been almost a decade since his passing but the reporter revealed that Aku had kept a diary for many many years which contained not only his thoughts but also newspaper articles and trendy catchphrases at the time.

I didn't understand 100% of the feature but my impression is that Aku had made the transition from frequent lyricist to author since he felt that an ever increasing group of new and young songwriters popping up in the 1980s was making him a bit out-of-date. However, he never was quite content about being just a writer of words instead of lyrics and from time to time, he would still produce songs for some of the greats in the Japanese music industry. But with that peek into his diary, I got the feeling that there was a sense of desperation as his time came to an end...that he didn't want to relinquish his greatest gift.

Perhaps those feelings came to the fore when he wrote "Jidai Okure" (Old-Fashioned) in 1986 for singer-songwriter Eigo Kawashima（河島英五）. Another kayo veteran, composer Koichi Morita（森田公一）, took care of a melody that sounded downright elegiac. The NHK report also mentioned that the song had been created just on the eve of the Bubble Era when the then-young generation of Japan was about to truly taste a time of decadence through travel, hostess clubs and discos such as the famous Julianas. Aku may have seen this and jotted down his observations into the diary and felt that an age was truly passing by with him being swept along. "Jidai Okure" certainly is melancholy but there is still a sense of wistfulness and gratitude that the happier age did exist for him and his contemporaries to enjoy. The one line that stands out is "Jidai okure no otoko ni naritai"（時代おくれの男になりたい）which means "I want to become an old-fashioned man". Perhaps the song also has a defiance stating that Aku and the others would rather keep their old-fashioned attitudes and songs instead of moving on, but the rest of the song also illustrates the protagonist slowly getting quieter...not yelling at his kids so much and not standing out as much as he used to as a young and ambitious fellow. In a way, I see it as a lyrical declaration of passing the baton to the newer Young Turks.

The original recorded version is below but I thought Kawashima's performance in the video above had an even better tone with just him and his majestic piano. Wouldn't be surprised if there were a fair number of folks in the audience quietly tearing up.


Listening to "Jidai Okure", I was also reminded of another majestic ballad by Tsuyoshi Nagabuchi（長渕剛）, the karaoke favourite "Kanpai"（乾杯）which is arguably one of the best go-to songs to celebrate a wedding among all those family members and friends. "Jidai Okure", then, could be more for retirement as a few buddies get together to celebrate and commiserate. The song is supposedly set in a bar or an old neighbourhood izakaya for the guys to drink down the realization that an age is passing.

To add to the wistfulness of it all, the song only got as high as No. 77 on Oricon although it won a special prize at the Japan Cable Awards. But listening to the recorded version, I guess I can't be that disappointed since the original sounds a little too cheerful (it was actually used for a sake commercial). If it had taken on the gravitas of the performed version from the top video, I think Oricon could have shown it some more love. However, the good news was that when the song was re-introduced on a 1991 NHK documentary on Aku, "Jidai Okure" suddenly gained in popularity leading to it being re-issued as a single. Kawashima then appeared on the Kohaku Utagassen at the end of that year to perform it; ironically 1991 was seen as the end of the Bubble Era.


Covers have been made of "Jidai Okure" including one by Koji Tamaki（玉置浩二）. I'm sure Kawashima who died in 2001 would have approved. And I gotta say that along with his other magnum opus, "Sake to Namida to Otoko to Onna"（酒と泪と男と女）that was a karaoke staple at my old haunt of Kuri during my university years, Kawashima could really belt out those "take-a-moment-to-reflect" ballads.

As for Aku, he would live for at least another 20 years after writing the words to this poignant song. It may not have been at his old frequency but he still continued to provide his lyrics to other singers, so I'm not sure whether "Jidai Okure" was a culmination of some mid-life crisis after which he gained a certain contentedness about that part of his life. However, he did leave a song that has become a symbolic tune representing the passing of a certain time period to be reminisced over among friends and family, and for that, I'm sure a lot of kayo fans are grateful. 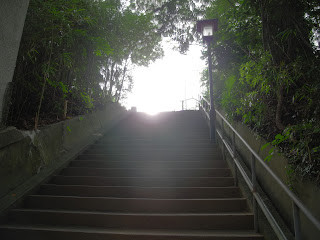