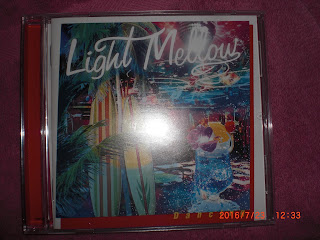 Well, I'm still waiting for that latest installment from the "Light Mellow" series of City Pop/J-AOR songs. I had been hoping that it would arrive today since all of us here in Toronto will be entering a long holiday weekend but since it didn't come to the door, any potential arrival will therefore now be Tuesday at the earliest. Ugh, is all I can say for now.


One of the reasons that I decided to get "Light Mellow - Wave" was for a cool song by a musician-songwriter that I hadn't heard of before by the name of Makoto Saito（斎藤誠）. And while waiting for that CD, I decided to take a gander at another YouTube ad video for another in the "Light Mellow" series, with this disc called "Travellin'". The usual urban contemporary material from Japan was present but then I got intrigued by the 4th track's excerpt. Looking up the tracks at Amazon, I discovered that it was once again Mr. Saito.


Fortunately, the whole song could also be found on YouTube. Allow me to introduce "Aru Gray na Koi no Baai" (The Case of a Certain Gray Love), a groovalicious number by Saito that was his 3rd single from 1984, and a track on his 2nd album from that same year, "Be-Gray". One of the commenters stated that Saito has some Michael McDonald influence, and yup I think there is a nice amount of Doobie Brothers in the arrangement. It does sound light and mellow although Saito is singing about trying to get a relationship out of the gray zone. Saito did indeed write and compose the single.

As for Saito himself, he was born in 1958 in Tokyo but moved about with his family during childhood to places like Hiroshima, Takarazuka and Shizuoka. In 1977, when he entered the prestigious Aoyama Gakuin University, he also entered a music circle called Better Days which also included his senpai, Keisuke Kuwata（桑田佳祐）of Southern All Stars. Kuwata was indeed the inspiration for Saito to become a professional musician and songwriter. Saito would make his major debut (although he had already become involved with the music industry before then) with the album "LA-LA-LU" in 1983.

When Saito consulted Kuwata after graduating from university about his next steps into the music world, the latter simply told him "You're 10 years too early to quit music!", perhaps suspecting some trepidation in his Padawan. Luckily for us Japanese music fans, Saito heeded his advice. Now I'm not only going to have to get "Light Mellow - Travellin'" but also the original "Be-Gray". So many aural temptations out there.