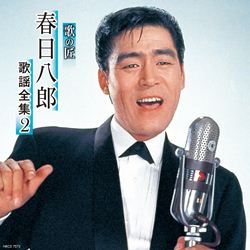 It came as some sort of epiphany a week or so ago that most singers would have a song or two in their repertoire that isn't like the others, or a piece with a musical style that you wouldn't usually associate the particular singer with. So because of this and a lucky coincidence when planning the articles, this set of Yonin shu articles will feature works by these four enka veterans that deviate from their status quo in one way or another. With that said, let's begin with Hachiro Kasuga (春日八郎).

The moment I heard "Hyotan Boogie" being sung by one of the Oji-sans at the karaoke bar back in Sugamo, I knew I had to put it down in an article some time once I got back. This tune was not only catchy, it also revolves around the hyotan a.k.a. calabash a.k.a. bottle gourd, which is quite strange in an amusing sort of way, and something you don't see/hear of everyday. Why I feel that "Hyotan Boogie" is my choice for this set of songs is because, to me, Hachi equals more serious sort of enka rather than fun little ditties. Of course, he has stuff similar to "Hyotan Boogie" in his extensive discography, but I don't see him performing those often, if at all - y'know, besides his hugely popular hit from the same year, "Otomi-san" (お富さん).


You can see what a hyotan is here.

Showa era composer, Yoshi Eguchi (江口夜詩) was the one behind the jolly melody, and together with Hachi's carefree way of singing, "Hyotan Boogie" sort of reminds me of "Otomi-san", just that the former has a more Western flair. From what I've read about the ditty in the above video's description, the late Kikutaro Takahashi's (髙橋掬太郎) lyrics seem to talk about the Yoro waterfall in the Gifu prefecture and an old story behind it. I'm not entirely sure what goes on in it, but there's something about the water at the falls being turned to sake, and people would used the squash (hollowed out and probably also dried) to collect this water-sake and bring it home to drink... The fellow in "Hyotan Boogie" must've brought back too much sake.

"Hyotan Boogie" was released in 1954, which wasn't long after Kasuga made his debut. While it's a catchy tune and all, it didn't seem to be one of the First Enka Singer's mega hits. The song can be found in Hachi's compilation album set "Uta no Takumi Kasuga Hachiro Kayo Zenshu" (歌の匠 春日八郎歌謡全集). The picture at the start is from the second album in the set, but "Hyotan Boogie" is actually in the first album. I chose this picture in particular because it looks like it fits "Hyotan Boogie" better as it has an animated Hachi.

To round things up, here's Michiya Mihashi's (三橋美智也) take on "Hyotan Boogie". Personally, I prefer the original. Kasuga's higher and more nasally voice brings out the fun in the song - it's easier to imagine the main character happily dancing around in a drunken stupor with a hyotan filled with sake in hand. I actually find Michi's rendition to be rather flat in comparison. Michi's version can be found in his cover album of Hachi's songs, "Kogane no Utagoe Mihashi Michiya 'Kasuga Hachiro wo Utau'" (黄金の歌声 三橋美智也 “春日八郎を歌う”).
Posted by Noelle Tham at 5:15 AM