Leon Jessel -- The Parade of the Tin Soldiers (おもちゃの兵隊のマーチ) 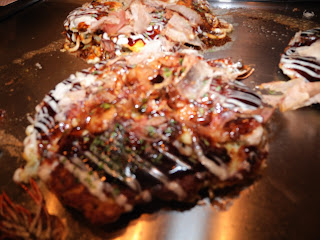 Ah, look at that okonomiyaki frying away there. I took that photo at Chibo, a restaurant way up the Ebisu Garden Place, back in late 2014. That was my second dinner during my trip back to Tokyo. The okonomiyaki had all the typical toppings: wavy bonito flakes with a collective mind of their own, tangy sauce, and nori powder. And before I forget, there were the streaks of whole-egg mayonnaise. In all likelihood, that mayonnaise was by the famed Kewpie Corporation, the one with the logo of the cute baby wanting a hug.


About 6 weeks ago, I did an article focusing on the theme song of a venerable cooking show on NHK called "Kyo no Ryori"（今日の料理）by the late Isao Tomita（冨田勲）. That was and still is quite the long-running theme tune, but there has also been another theme song for yet another decades-old cooking program on Japanese TV, "Kewpie San-pun Cooking" (the segue is now complete), on NTV. That staccato organ riff in the intro probably has reached partial earworm status as well.

However, unlike the Tomita theme for "Kyo no Ryori", the theme for "Kewpie San-pun Cooking"（キユーピー3分クッキング...Kewpie 3-Minute Cooking）had a distinctly foreign origin.

It was actually a marching tune that was created all the way back in 1897 (our third-oldest year listed on "Kayo Kyoku Plus") by German composer Leon Jessel titled "The Parade of the Tin Soldiers" or as it was translated in Japanese, "Omocha no Heitai no March". I kinda figured that the song had a Xmas toy sort of feeling to it, but instead in Japan, it has become the tune representing all things culinary instead of military.


One of the questions that I had about the show was that although the title refers to 3-minute cooking, the actual program is 10 minutes or more than 3 times the original length that the title boasts. It rather reminds me of the fact that the American sitcom "MASH" lasted 3 times longer than the actual Korean War where the show was set. Well, according to the J-Wiki article on the show, "San-pun Cooking" had originally been scheduled for a 5-minute slot in which the actual cooking took place within 3 of those minutes. I could only imagine that the incidence for nervous breakdowns was probably higher for all involved during those early days. The NTV show, by the way, premiered in January 1963.

And gosh darn it, the powers-that-be just had to do something cute one day by having aidoru group Momoiro Clover Z（ももいろクローバーZ）do a guest cameo in the opening and ending credits for one show.


Finally to add further risk of diabetes, here is Miku Hatsune's（初音ミク）version of the theme.