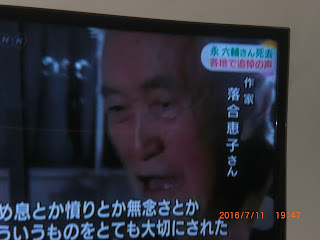 Most likely over the next several months, there will be box collections of the works of lyricist Rokusuke Ei coming out in the major music stores. I just found out this morning that Ei had passed away last week at the age of 83. So the Creator article this time will be as much a tribute to the man as it will be a look at his songs.

Rokusuke Ei was born in 1933 in the district of Moto-Asakusa, Tokyo, and along with his title of lyricist, he was also a radio personality, an essayist and a tarento although according to the NHK report on his death, he far preferred being behind a radio mike over being in front of a TV camera. In fact, his J-Wiki article mentioned that he truly loved the medium of radio; one piece of information stated that after high school, he and a group of friends got together to buy various parts in Akihabara to create their own crystal radio set. The leader of that group just happened to be the late actor Kiyoshi Atsumi（渥美清）who would gain his own legend through his famous character of Tora-san.


But when the NHK report started, the song that played is arguably the one that he is the most famous for, "Ue wo Muite Arukou"（上を向いて歩こう）by Kyu Sakamoto（坂本九）from 1961. Ei wrote this evergreen tune about smiling through the tears with his frequent songwriting partner, Hachidai Nakamura（中村八大）, who had left this mortal coil more than 20 years previously in 1992.


However, he and Nakamura got their songwriting tandem started in 1959 when they created the Mood Kayo "Kuroi Hanabira"（黒い花びら...Black Petals）for kayo singer Hiroshi Mizuhara（水原弘）. It was also a first for Mizuhara in that it was the singer's debut single. The combination was sweet for all concerned..."Kuroi Hanabira" won the Grand Prize at the very first Japan Record Awards in that same year.

The Ei/Nakamura duo had more success into the 1960s with another kayo standard, "Konnichiwa Akachan"（こんにちは赤ちゃん）from 1963 sung by Michiyo Azusa（梓みちよ）. As I mentioned in the article for that song, Ei wrote the words for Nakamura as a present of sorts in celebration of the upcoming birth of Nakamura's child.


Another composer who often worked with Ei was Taku Izumi（いずみたく）. Together they created another kayo classic in the form of "Ii Yu da na"（いい湯だな）in 1966 for the vocal group Duke Aces（デューク・エイセス）. Afterwards, the song was further immortalized as the ending theme for the very long-running variety series featuring comedy group The Drifters, "Hachi-ji da yo! Zen'in Shuugo!"（8時だよ！全員集合...It's 8 O'Clock! Everyone Assemble!）Considering how beloved onsen are in Japan, I would think that this song has triggered a Pavlovian craving for folks to head over to Hakone and other hot spring-laden resorts.


In the J-Wiki article on Ei, it said that although the songwriter liked some specific enka tunes, he wasn't a huge fan of the genre, generally speaking. And yet, he created one of Saburo Kitajima's（北島三郎）signature songs, "Kaero kana"（帰ろかな...Shall I Go Home?）for release in April 1965. An article for the song has yet to be written up on "Kayo Kyoku Plus" so I will keep things brief here and just say that Ei and Nakamura managed to create an anthemic mountain-moving ballad for Sabu-chan that has been performed at no less than 7 of the Kohaku Utagassen specials, and most if not all of them probably ended the show in epic paper snow blizzards.

I'm uncertain whether Ei kept to a fixed theme when it came to writing lyrics for songs but just from looking back on some of these kayo here, I would guess that the lyricist liked to reflect specifically on the Japanese heart whether it dealt with the simple pleasures of soaking in a hot spring or keeping that smile up even during the most heartbreaking of times.

I may have heard it on that NHK report and I definitely did read it in the J-Wiki article but Ei stopped being a lyricist for the most part after 1969. According to that article, he had apparently been afraid that once anything got onto television, it would simply get trendy for that fact and perhaps not for the quality of the song itself. But the main reason was that Ei wanted to put his priorities on having Nakamura and Izumi more as friends than also as collaborating colleagues in the music industry. Perhaps he didn't like the stresses of songwriting wearing on their mutual friendships, and besides, it seems as if Ei had a lot of other interests to pursue to keep him happy. I'm not a religious man but I hope that Ei has now reunited with his old friends, Nakamura and Izumi (who also passed away in 1992) to talk about the old days. Meanwhile, I'm sure that there will be people here, famous or not, who will converse on and sing those nostalgic tunes at karaoke or the bars.


I'll leave you with a rendition of another Ei classic also from 1963, "Miagetegoran Yoru no Hoshi wo"（見上げてごらん夜の星を）, originally sung by Kyu Sakamoto.