Memories of My Standout Singers: 1981 (J-Canuck)


As I write this, Japan is currently celebrating the annual Tanabata festival (July 7th) with the prime focus on Sendai, Miyagi Prefecture. One of the customs during this holiday is writing wishes on colourful strips of paper known as tanzaku and tying them to the branches of a tree. For Tokyo, that is probably the biggest symbol for Tanabata although Sendai goes full throttle as you can see in the video above. 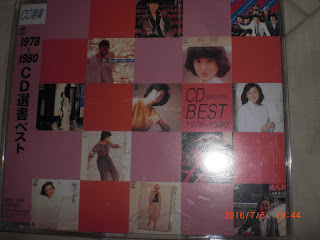 Personally, I am also celebrating an anniversary of sorts today. It was 35 years ago today that my plane dropped down onto the tarmac at Narita Airport so that my classmates and I could launch the graduation trip from Japanese Language School. And as I have mentioned numerous times, this was the trip where my love for kayo kyoku finally blossomed.

So as such, I've decided to plunk down the singers who I discovered during that fateful trip and afterwards that have forever stayed in my mind as being symbolic of my half-summer in Japan in 1981. I'm not placing specific songs here, just the singers. A few of them have had long careers while a couple of them to me are one-hit wonders. These singers are not going down in any specific order. Plus, I won't go on some sort of long serenade for each of them since they already have their own entries...just a few lines each.


"Fresh, fresh, fresh...". The lady, the legend, the aidoru. For me, she was the introduction to that huge mass of unique Japanese teenybopping girls with the happy tunes and the snaggletoothed smiles.


His movie "Blue Jeans Memory" was all over the media and any external structure that could afford a poster. The supposed young tough who sent teenage girls into a frenzy by simply squeaking "Matchy desu!"


My one-hit wunderkind with the high-pitched voice who appeared on all those ancient VHS tapes of "The Best 10" and "The Top 10" that were played at my classmate's house during a post-trip party a couple of months after the event itself. I didn't hear anything more from him after his big hit of "Memory Glass"（メモリーグラス）but that particular technopop song has buried itself deep in my memories.


Along with Seiko-chan, another early 80s aidoru with memorable hair. Her "Machibuse"（まちぶせ）was another frequently heard song on the rankings shows. My first exposure to Yuming even before I knew about Yuming.


The supremely long hair and that wonderful voice for that gentle ballad. Since it was early days, I had no idea that she had once been an aidoru herself. She simply registered as a classy young lady who hit me right in the heart!

Bought my first audiotape in Japan and it belonged to these guys. With their brand of "computer music", they absolutely stood out in my mind. As soon as I got my cherry-red SONY double-cassette recorder and their first album, I played it in my room at the Tokyo Prince. "Rydeen" may have come out a couple of years before my trip to Japan but it still finely represents the band.

I will be coming out with sequels to my memories in future entries to represent my history with "Sounds of Japan", my time in Gunma and then my long stint in Ichikawa.
Posted by J-Canuck at 8:19 PM