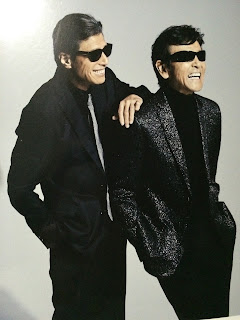 At last, I had watched an "Abunai Deka" (あぶない刑事) film! I managed to catch the latest installment of the buddy cop franchise that spanned three decades on the way to Japan about a month ago and it was aMAzing to finally see Hiroshi Tachi (舘ひろし) and Kyohei Shibata (柴田恭兵) in action.

Admittedly, the plot for "Saraba Abunai Deka" was rather weak, just as any nth sequel would have, and that it was pretty much an 80's action flick in modern clothes *ahem "The Expendables"*. But it did have its insanely cool and surprisingly funny moments. Plus, most of the guys were impeccably dressed and stunning to look at - Koji Kikkawa (吉川晃司), who played the villain, looked incredible with his silver hair, and there were even times where I didn't know who to root for! However, I think I might have appreciated it more if I had watched the previous films and/or the TV series as there seemed to be some running gags in there. 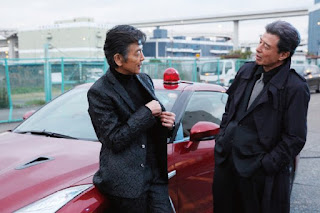 There were a number of scenes that had my eyes popping right open and my excitement levels to the max. That includes Tachi going head to head with Kikkawa in a fist fight, and him riding a Harley with hands occupied by a shotgun - totally makes up for at least 5 minutes of seeing him mope and sulk after the tussle. And let's not forget about Shibata; dang, that guy really impressed me in this movie. He's got some slick dance skills, and seeing him sprint like his life depended on it (seems like a staple in the series) was incredible at his age!

I was quite taken by Shibata's chase scene, as you can tell from up there, and the background music that played as Sexy Oshita hunted down his target fascinated me. From what I vaguely remembered, there was this cool vibe to it, but at the same time it also had an element of urgency. Without a title and the only clue being that it was most likely sung by Shibata himself, I had to do some hunting myself.

It wasn't particularly hard to find what I was looking for as Kyo-sama's discography isn't particularly extensive, and I mainly focused on songs that sounded like they could be used in an intense chase scene. After some digging around in YouTube, I narrowed it down to "RUNNING SHOT", "TRASH", or "FUGITIVE". From what I'd been reading, "RUNNING SHOT" seemed to be the song I was looking for. But somehow I was underwhelmed when it was playing - I expected more. "TRASH" was decent, though I was aware that this was the least likely choice. Lastly, "FUGITIVE". The name itself also potentially implies hunting down a criminal so there was a chance that it might fit the bill.

If there's one word to use to describe "FUGITIVE", it's "unpredictable". Why? As the first few seconds of the song unfolded, you'd think it's some calm and soothing piece as the piano and sax hits your ears. Just as you're about to get nice and comfy, the drums, loud and sudden, kick in with a nice beat to wake you up, followed by the shrill synths to make a quintessentially 80's, high octane melody that keeps one (me, at least) going back for more. Also, I like Shibata's voice - deep and mellow. "FUGITIVE" is definitely my favourite out of the three tunes I picked.

Composing this was Ichiro Haneda (羽田一郎). As for Chiroru Yaho's (谷穂ちろる) lyrics, I'm not entirely sure if they are in the wanted criminal's or the cop's point of view. Either way, to make sense of the sudden jump in tempo, I'm guessing that one of them must've been relaxing, maybe getting a cup of coffee or something, but one spots the other, setting off alarm bells in both their heads, and the game of cat and mouse begins.

Although I'm still unsure about whether or not "FUGITIVE" or "RUNNING SHOT" was used in Sexy Oshita's chase scene in "Saraba Abunai Deka", I managed to find a clip of half of the duo running after the bad guy with the former tune playing in the background. You can kinda see Shibata's knack for sprinting too - probably stemmed from his love of baseball.