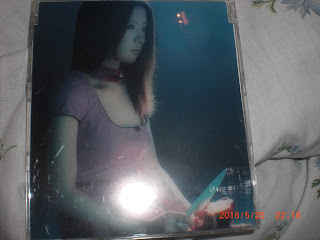 When I bought the CD of Ringo Shiina's（椎名林檎）5th single way back when, I already had my impression of the singer as this terrifying ball of energy armed with a guitar and an assassin's glare. Still taking a look at the cover above, I had thought it was a fairly innocent looking photo of Shiina slicing up an apple...aside from the death glare. Then, I decided to take a closer look at the bottom right corner of the cover and realized that it wasn't the apple she was slicing; it was her wrist. Bloodless, to be sure, but still, I just went "Yeah, that's the Ringo I know and love."


"Gips" (Orthopedic Cast) was released in January 2000 as basically the singer-songwriter's first ballad single in which Shiina is screaming her heart out for a guy. And according to J-Wiki, she had created the song before her debut some years previously to relate her memories about an old flame. I hope the guy was properly flattered. In her lyrics, she even made reference to Kurt Cobain and Courtney Love since he was a big fan of Nirvana although she wasn't.

I remember the music video for the song which unfortunately I could no longer find online with Shiina slowly and powerfully striking the guitar in a dark foreboding landscape. It's probably one of the most famous images I have of her along with her in that nurse's uniform in the video for "Honno"（本能）. Apparently, that pink one-piece dress was something that she simply purchased at the famous fashion emporium Shibuya 109 in Tokyo.

"Gips" managed to hit the charts right at No. 3 soon after its debut and that's where it peaked, ultimately selling more than a million copies and going Gold. It is still the 2nd-biggest hit for Shiina after the aforementioned "Honno", ending the year as the 27th-ranked single. The song also appeared on her 2nd album "Shouso Strip"（勝訴ストリップ...Winning Strip）which came out in March 2000. By the end of the year, that album came in at No. 3 in the yearly rankings.

To leave off, I had always wondered why the Japanese word for orthopedic cast was "gips" or as I had thought it was spelled according to its pronunciation "gibbous". Well, "gips" comes from German, meaning "plaster". A couple of years before Shiina's single came out, I regrettably had my first experience with a plaster cast, thanks to a trip down some steps at what is now the Japan Bank for International Cooperation during a teaching session there. Ended up having that thing on my leg for 3 weeks. Mind you, there was one fortuitous consequence during my convalescence at home. It was the 1998 Winter Olympics in Nagano and I got to see the Japanese ski jump team win a Gold live on TV.
Posted by J-Canuck at 9:16 PM