Well, I was going to keep it to two articles of my own today but then I saw this video, and I simply had to get this one in. This is one of those rare gems that might come across my vision once in a blue moon and there is no sign of a blue moon tonight.

What I am talking about is this music video for "Haru Shite, Koi Shite, Mitsumete, Kiss Shite" (Make It Spring, Fall In Love, Look For It, Kiss Me) by this New Wave band called Portable Rock (ポータブル・ロック) which had its heyday between 1983 and 1986. And what is notable about it is who was fronting the band as its vocalist. It was none other than the lady who would half a decade later become the Divine Ms. M of Pizzicato Five, Maki Nomiya（野宮真貴）. I actually and somewhat offhandedly threw out the trivia that Nomiya had been part of this group in one of the first P5 articles I wrote, "Baby Portable Rock" back in early 2013, never knowing that I would ever witness an actual video from Portable Rock itself.

When Nomiya started her solo career in 1981, her backing musicians at her debut concert happened to be Nobuo Nakahara (中原信雄...bass) and Tomofumi Suzuki (鈴木智文...guitar). The following year, they decided to make it a permanent professional relationship by creating Portable Rock. However during their 3 years of existence, they never really hit it big although "Haru Shite Koi Shite, Mitsumete, Kiss Shite" was a tie-up song for the spring campaign for Kose Cosmetics in 1986. The song was written by Saeko Suzuki（鈴木さえ子）and composed by Keiichi Suzuki（鈴木慶一）of the Moonriders.


Still, it is interesting to see Nomiya in her mid-20s prancing about like a proto-version of her Shibuya-kei self singing a cute technopop commercial jingle. Now, I just gotta track down some of her solo stuff even before Portable Rock! 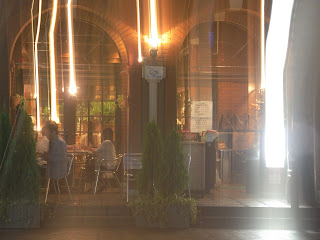