The Works of Reiko Yukawa （湯川れい子） 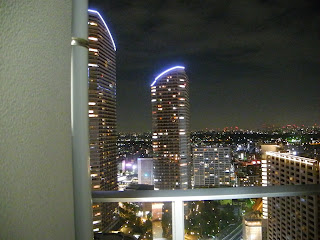 Everybody by now knows about my penchant for putting up photos either at the beginning and/or the end of my articles. The above is a photo of the view outside of my good friend's apartment in the district of Musashi-Kosugi in Tokyo. I would have loved to have put up an actual photo of the topic of today's Creator article, lyricist and music critic Reiko Yukawa, but I couldn't really find one from a site that would have allowed me to post it up without any sort of potential complaints in terms of copyrights. But in a way, the photo of the dramatic city view can be considered apropos since it kinda fits my impression of Yukawa in terms of some of the songs that she has helped create. From what I find out from her J-Wiki biography, she has written Japanese songs across the spectrum whether it be a pop love ballad by Akiko Kobayashi to a Latin-infused kayo sung by enka heartthrob Kiyoshi Hikawa（氷川きよし）. Referring to that image, though, whenever Yukawa's name pops up in my mind, I usually think urban contemporary in Japan, namely J-AOR and City Pop for some reason.


And the song that pops up consequently is "Long Version" (ロング・バージョン) from 1983 by mellow crooner Junichi Inagaki（稲垣潤一）. As I posited in the article for the song, this is one tune that deserves to be heard while looking at my top photo and sipping back a bourbon.


However, arguably, her most famous work might just be on Akiko Kobayashi's（小林明子）"Koi ni Ochite"（恋におちて）from 1985 with those wistfully sighworthy lyrics about falling in love. I've sung it in karaoke a number of times but of course, I had to change one line (with all due respect to Ms. Yukawa): "I'm just a HU-man, fall in love". I sounded somewhat like a Ferengi when I sang that (all you Trekkie kayo fans can chuckle quietly now).


But for some information on Ms. Yukawa. She was born in Meguro Ward, Tokyo in 1936 with her father being a captain in the Japanese navy and a great-grandfather who had been the man to introduce the beloved brand of pear known as La France to Japan among other famous relatives. In 1953, she took her first steps into show business by debuting as a stage actress and appearing in movies. Yukawa had even entertained the troops at American military bases in Japan as well, and through an old boyfriend, she started gaining an interest in jazz. In 1959, she was employed as an interviewer and a jazz critic for the Japanese magazine, "Swing Journal", following which she also got gigs as a radio DJ and a commentator on TV wide shows. In fact, I was surprised to find the above video in which Yukawa in her twenties appeared on an old American game show I used to watch as a toddler, "What's My Line?"


In 1965, Yukawa wrote the Japanese and English lyrics for "Namida no Taiyo"（涙の太陽）as sung originally by Emy Jackson. Now I'm not sure if this song was the very first contribution by the lyricist but it's the entry that does come first in her bio about her songwriting so you can take it as you will. And I didn't find any information about how Yukawa gained her prowess in the English language but she certainly did well on "What's My Line?" and she is also listed among her other credits as a translator.


I guess there was something about the music of Americana that stayed with Yukawa since she contributed to a number of The Chanels's hits such as "Runaway" (1980). The band is now known as Rats And Star (ラッツ&スター).

Yukawa also provided lyrics to 80s aidoru such as Yui Asaka（浅香唯）. I haven't applied a fine-toothed analysis into the lyrics that she has written but my initial impression is that she worked on songs with a bit more of a dynamic edge for the Japanese teenyboppers. The above is "Hitomi ni STORM"（瞳にSTORM...Storm in Her Eyes）which was composed by Daisuke Inoue（井上大輔）. Incidentally, both Yukawa and Inoue were also responsible for the aforementioned "Runaway". "Hitomi ni STORM" was released as Asaka's 7th single from May 1987 and it went all the way up to No. 4. It is also included on her 3rd album "Rainbow" from the same year.


Anison was also an area that Yukawa dabbled in. For example, she provided the lyrics for the soaring Kanako Wada（和田加奈子）theme to "Kimagure Orange Road"（きまぐれ・.オレンジ☆ロード）, "Natsu no Mirage"（夏のミラージュ）. And she was also behind the words for one of the opening themes to another 80s classic anime "Maison Ikkoku"（めぞん一刻）, "Sunny Shiny Morning"（サニーシャイニーモーニング）from 1987 by Kiyonori Matsuo（松尾清憲）.


Do you remember The Monkees? Sure you do! Watching their Saturday-morning program was one of my rituals way back when. Davy Jones was the cute little British member that all the girls fell for. Plus, it seems as if he had an effect on folks in Japan since I did see him time and again show up on variety programs over there. Well, I found out from Yukawa's bio that she and Inoue once again got together to weave a disco tune just for him back in 1981 titled "Maho de Dance"（魔法でダンス...Dance, Gypsy）. No idea how the song did on Oricon, but I rather noticed the Roy Orbison riff that Inoue placed in the song.

I'd like to leave off my exploration here with another Junichi Inagaki tune, "Ame no Asa to Kaze no Yoru ni"（雨の朝と風の夜に...Rainy Mornings and Windy Nights）from August 1996 as his 34th single. It's pure Inagaki here with Toshiaki Matsumoto（松本俊明）behind the mellow melody. Yukawa's lyrics seem to describe a contented couple some 10 years into their marriage walking through the park. The song got as high as No. 83 on the charts and is a track on his 16th album "PRIMARY" from September in the same year. It made it up to No. 30.

The trigger that finally had me writing up about Yukawa was on seeing an NHK interview of the now-80-year-old lyricist recently. I found out through the J-Wiki bio that she is a huge fan of Elvis and The Beatles, and she gave an anecdote to the interviewer about the time that she actually got to interview the Fab Four in 1966 at what may have been the Hotel New Otani (one of the places that I taught at for years). The story is also listed in J-Wiki, but apparently although Paul, George and Ringo were really nice to Yukawa, John Lennon was not exactly the most welcoming sort, and in fact, simply snubbed her. Some years later after The Beatles had broken up, Yukawa got to interview Lennon on his own and asked him point-blank about his attitude back then. John also remembered the cold shoulder he gave and apologized as he explained that at the time, a long line of sycophantic politicians were lining up to meet the band and he simply got really pissed off at the lot and thought that Yukawa was one of the same folks.

I still don't know all that much about the life and times of Reiko Yukawa but I've got the feeling that she has amassed an iceberg's worth of stories over the past 50 years. As for an impression of her lyrical style, I can only give a surface opinion since I have yet to go through all of her songs and I know that the list given in J-Wiki is not comprehensive, but from what I have gone through, I gather Yukawa is a student of love in all its aspects.
Posted by J-Canuck at 11:02 PM