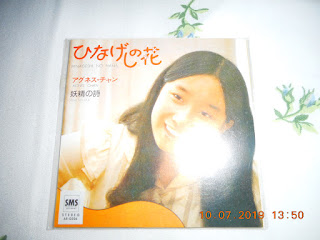 Over the past several months, some of my translator friends have been involved in setting up a translation conference to be held here in Toronto hopefully in 2021. A topic that has been getting brought up is about who to invite as a keynote speaker. Various names have come up but I have wondered about the possibility of 1970s aidoru Agnes Chan（アグネス・チャン）. Between 1976 and 1978, and I've mentioned this in previous Agnes articles, she attended University of Toronto majoring in child psychology. According to her discography, though, she still had time to release a few singles although I think her TV appearances in Japan were pared back considerably.

I'm not aware whether she has had any experiences in translation or interpretation but she has been an essayist and a UNICEF Goodwill ambassador at the very least. Many years ago, when my old friend from the Japanese-Canadian Students' Association at U of T was establishing an alumni association in Tokyo, Chan's name had also been bandied about as a speaker but regrettably she politely declined the invitation. Not sure if anything will change this time, but as they say, hope springs eternal.


Anyways, here is Chan's 11th single from August 1975, one of her last few before she made the crossing over to Canada, "Shiroi Kutsushita wa Niawanai" (The White Socks Don't Match). Now, before any of you folks get the idea that this is simply an ode to tonsorial crankiness, the wistful tune, penned by Yumi Arai（荒井由実）herself, is a melancholy number about trying to move on from a former relationship as a woman sees her old flame in the arms of another. I really like the refrain when it soars forward with the help of those strings and the sighing background chorus reminds me of at least one pop song that I used to hear on the radio back in that decade.

I don't know how it did on Oricon but I would like to think that Arai's pedigree as a songwriter had already made its mark for other singers at that time.