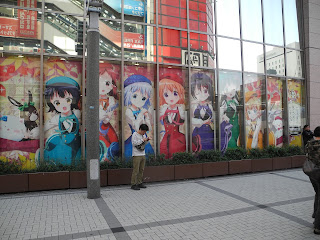 Last month, I wrote about the joyful jazz/pop waltz "Gin no Spoon ~ Blend of Memory"（銀のスプーン）that ended the Fall 2019 special in the "Gochuumon wa Usagi desu ka?"（ご注文はうさぎですか？）franchise with a duet between seiyuu Minori Inase（水瀬いのり）and Nana Mizuki（水樹奈々）that would have put a tear in a number of Gochiusa fans' eyes.


Well, along with that OVA, "Sing For You", came a DVD-ROM containing the songs that were created and performed during the special, including "Gin no Spoon". Unfortunately, a lot of those full versions of those tracks have been taken down by the powers-that-be, so I had to do some scrambling around. Basically, most of what I could find are just the montage-type snippets during the show.

The one that I really wanted to put up is the contribution by demure (but with a sly sense of humour) Chiya as played by Satomi Sato（佐藤聡美）since she actually puts up an enka number with the title of "Furimukeba Tsuki, Iie Dango"（振り向けば月、いいえ団子。...When I Turn, There is the Moon...Nope, It's a Dumpling.）as befitting her Wa style. With lyrics by the prolific Aki Hata（畑亜貴）, I tip my hat off to composer Masahiro Mizoguchi（溝口雅大）since "Furimukeba" has some similarity to an enka classic by Sayuri Ishikawa（石川さゆり）, "Amagi Goe" （天城越え）.


Once again, just the briefest of snippets here but the song list also includes Syaro's aidoru-tastic "Hi Hi High☆" which has the usually button-down waitress of the Fleur de Lapin going bonkers on the stage, thanks to that most dangerous of drinks, coffee. Written by Aiko Takase（高瀬愛虹）and composed by Tako Yamaguchi（山口たこ）, the song is well-titled since it may refer to Syaro's state of mind. It's for one of those times when decaffeinated simply won't do.


The only full version of a song on the soundtrack that I could find is the ultra-cheerful "Sing a Song Paya Poya Melody"（しんがーそんぐぱやぽやメロディー）that has the entire main cast of Petits Rabbit's and Chimame-tai（チマメ隊）performing. With lyricist Hata paired with Kaoru Okubo（大久保薫）again, after creating the adorable "Daydream Cafe", the very first opening theme for "Gochiusa", the two of them came up with "Sing a Song Paya Poya Melody" which could easily suffice as a possible opening theme for the the third season of the franchise next year. The beat is such that it could even rival the strongest rabbits in terms of how much bounce it can attain, and the song is quite similar to the opening for the second season, "No Poi!"（ノーポイッ!）.

Hopefully, the other full versions of the songs will return someday, and there is one more song from the soundtrack that I would like to cover if the original gets put back up.
Posted by J-Canuck at 8:14 PM