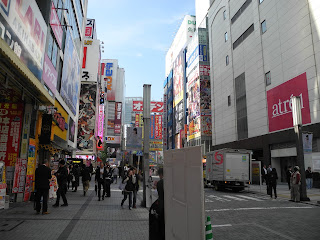 Over 10 years ago, there was the story of "Densha Otoko"（電車男...Train Man）about an Akihabara otaku and young lady who get into an unlikely romance when the former rescues the latter from a drunken idiot on the train. The Train Man is shocked and delighted to perceive some possible interest from the woman code-named Hermes and has to consult with his fellow geeks via 2channel about how to handle the situation.


The story was intriguing enough that it was adapted into both a movie and a TV series. I'd heard all about "Densha Otoko" when I was living in Japan, but by that point, the petals had fallen off the flower long ago when it came to my interest in the local TV dramas, so I never bothered watching.


It's only been recently that I discovered that the ending theme for the TV series was rock band Sambomaster's 5th single "Sekai wa Sore o Ai to Yobundaze" (That's What the World Calls Love). I had also heard about the band before since the vocalist Takashi Yamaguchi（山口隆）has had a penchant for going from soft vocalization to throat-shredding screams.


With "Sekai wa Sore o Ai to Yobundaze", which was written and composed by Yamaguchi, I think that the downtrodden corporate cog may have found his/her rallying anthem to get that second wind and go for something bigger and better. At the very least, the average salaried worker now had another song at the karaoke boxes to mightily de-stress. As for me, along with that feeling of getting off one's duff and becoming a hero to someone special, I've also enjoyed those key shifts in the refrain. Not sure if I could ever sing the song but I wouldn't certainly mind hearing someone sing it at karaoke.

Coming out in August 2005, the song went Gold, reaching No. 7 on Oricon and becoming the 76th-ranked single of the year. The single also ended up on Sambomaster's "Boku to Kimi no Subete o Rock 'n Roll to Yobe"（僕と君の全てをロックンロールと呼べ...Call Everything About You and Me Rock 'n Roll）, their 3rd album from April 2006, which peaked at No. 8.


"Sekai wa Sore o Ai to Yobundaze" has been covered by a number of singers over the years including Bird who performed her version with the pop unit Kuchiroro（□□□）in 2007 on her "BIRDSONG EP-cover BEATS for the party-". Her take is also pretty cool with that familiar Latin/club treatment that I've known her for.


I was surprised that "Densha Otoko" didn't quite get the interest of Hollywood since they were more than happy to adapt all those horror stories like "Ringu" along with heartwarming tales such as "Shall We Dance?" and "Hachiko". But then again, maybe something similar happened on TV instead.😁
Posted by J-Canuck at 3:51 PM