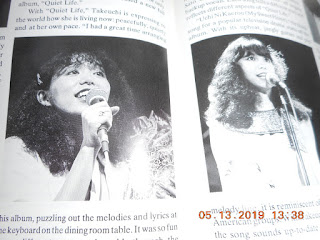 The various editions of NHK's Kohaku Utagassen have had plenty of hearty sentimental segments, and for tomorrow's showing, it looks like the organizers are doubling down. We will have the return of Hibari Misora（美空ひばり）through technology, Seiko Matsuda（松田聖子）and Yumi Matsutoya（松任谷由実）are coming back, and actor/comedian/director Beat Takeshi（ビートたけし）is slated to perform a song on the Kohaku for the first time that will describe his life and times.

Then, there is Mariya Takeuchi（竹内まりや）who will make her very first appearance on the annual New Year's Eve special. Rocket Brown of Come Along Radio and I were talking a bit on Saturday, and he was good-naturedly trolling me a bit by "accusing" me of hoping that Takeuchi would be singing "Plastic Love". To be honest, I had been hoping that would have been the case, but as a part of a medley of her hits. However, the schedule shows that she is only slated to sing one ballad: "Inochi no Uta" (The Song of Life) that has been getting some attention in the run-up towards the Kohaku.


Originally, "Inochi no Uta" was something that had been written by Takeuchi under a pseudonym, Miyabi, and composed by pianist Takatsugu Muramatsu（村松崇継）to be performed as an insert song by the sisterly tarento duo ManaKana（茉奈 佳奈）for the late 2008 NHK morning serial drama "Dan Dan"（だんだん...Over Time）which also starred the sisters. It was also released as the duo's 4th single in February 2009.

I read one Japanese comment under the above video which blithely stated that Takeuchi sings this far better than ManaKana. Well, yeah, that's not exactly a heart-stopping revelation, but I think the point is that having the sisters sing "Inochi no Uta" in that somewhat less refined way kinda brings that down-to-earth family feeling. The original single went all the way up to No. 18 on Oricon and is also available on the sisters' 4th album "Sweet Home" from April 2011.

The only other song by ManaKana that I have on the blog is their contribution to the various theme songs for the anime "Chibi Maruko-chan"（ちびまる子ちゃん）which was recorded over a decade earlier.


In the last little while, the rendition of "Inochi no Uta" that I've been hearing is the cover version by Takeuchi herself. The song was actually released in January 2012 as her 39th single, and her lyrics are meant to be a tribute to all who have gone through the good and bad times of life. All that has happened before leads to the people who we are now. Supposedly, the Kohaku performance will be prefaced by notes from various citizens about how "Inochi no Uta" has resonated in their lives, and most likely, there will be photos of people flashing across the screen while Takeuchi sings. The sentimentality will be strong with this one. The single did manage to hit No. 10, and it's also on her September 2014 album "Trad" which was No. 1 on the charts and No. 15 in the annual rankings for that year. Have the hankies ready.

This may have little probability of coming true although NHK has pulled a few surprises in recent Kohaku shows, but I wonder about the possibility of Takeuchi still doing some of her discography, and maybe even dragging her husband onto the stage. Gotta be optimistic.
Posted by J-Canuck at 3:41 PM