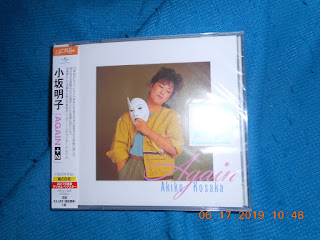 On getting that fortunate example of happenstance coming across Akiko Kosaka's（小坂明子）appealingly AOR "Hohoende Ai"（ほほえんで愛）a few years ago, I felt that I needed to purchase her February 1983 album "Again". As I mentioned in that article, I had only known Kosaka by that one song in the early 1970s for which probably most people know her for, "Anata"（あなた）. So to encounter her having done a song in one of my favourite genres of Japanese pop music got my interest up in seeing if "Again" was out there somewhere. I wasn't too sure, but luckily it was indeed on sale at Tower Records so it didn't take too much time in deciding to plunk down my yen!


Released in February 1983, as I also stated in the "Hohoende Ai" article, this was Kosaka's first album in about 6 1/2 years. A lot of the tracks were written and composed by her, including "Ocean Floor" which is about as City Pop as one can get with that funky bass, wailing guitar and grooving beat although apparently the party is actually taking place in some underwater wonderland.


The only other YouTube video that I could find for anything from "Again" was one of the entire album kindly uploaded by Danillo Freire. Track 1 is "Lonely Girl" with lyrics by Arisu Sato（佐藤ありす）. It starts off "Again" on that borderline between AOR and City Pop, and despite the title, it's pretty darn cheerful.

Another bouncy tune of the metropolis is Track 2 at 3:57 is "Bye-Bye Jealousy" which is another collaborative effort by Sato and Kosaka. Again, my compliments to the bassist and the guitarist here since thanks to their efforts, I was pleasantly transported to West Shinjuku once more. A grand Friday night was had by all due to this song. 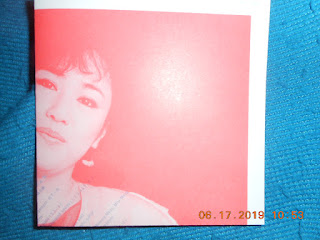 Track 3 at 8:06 is "Good-Bye Love", a ballad that talks of a sad but ultimately satisfying conclusion to a relationship between two people. I couldn't help but feel that Boz Scaggs' "We're All Alone" had some inspiration in the arrangement. Incidentally, both "Bye-Bye Jealousy" and "Good-Bye Love" would make up Kosaka's February 1983 single.

"Love Is Myself" at 25:03 is a relaxing Sunday-afternoon-at-brunch type of mid-tempo song highlighted by some mellow piano work and strings. Then, there is the guitar solo which had me tempted to order another orange mimosa. With that light Latin beat in there as well, memories of Junko Yagami（八神純子）from the late 70s came to mind.

The two bonus tracks attached to the re-release of "Again" just happen to be the A and B sides to Kosaka's July 1982 single. The A-side is "Cobalt Iro no Tenshi"（コバルト色の天使...Cobalt Angel）at 43:02, a story of the titular figure trying to encourage someone out of some despair. Starting off with some atmospheric arrangement that had me thinking Ruiko Kurahashi（倉橋ルイ子）, there is also some country ballad-like lilt for the main body of the song. Meanwhile, "Midnight Scene" is the B-side at 47:40, a cool City Pop tune about a woman waiting for that lover to come through the door at the bewitching hour. Both songs were arranged by Tsugutoshi Goto（後藤次利）.

Of course, all throughout the album is Kosaka's creamy vocals. For those who, like me, were accustomed to her high tones when she recorded "Anata" back in 1973, Kosaka in "Again" is a whole different story. Her voice took on a richer and deeper texture along the lines of the aforementioned Yagami and fellow singer-songwriter Ami Ozaki（尾崎亜美）, and it fit well with the urban contemporary tracks on this album.

As stated above, "Again" was Kosaka's first album in several years following her 1976 release of "Umi to Chopin to Bourbon to"（海とショパンとバーボンと...The Sea, Chopin and Bourbon）. It would be another 23 years before her next album "Pianish" in August 2006. 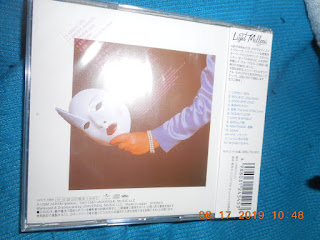