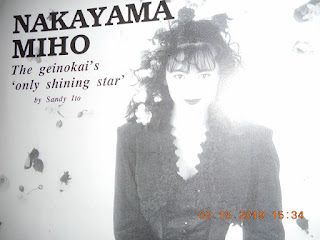 On hearing that Miho Nakayama（中山美穂）has released her first album, "Neuf Neuf" (No. 22) in over 20 years today, I think it was time to put up another article for Miporin.


Never read the manga or even saw the 1985 live-action movie, but I do know about "Be-Bop Highschool"（ビー・バップ・ハイスクール）which involved young toughs at a high school with pompadours stiffer than their backbones. I think the boys were more than happy getting into brawls, but then one day, a young girl arrived and made them an offer they couldn't refuse...guess who played the girl?


Yup, and the theme song for the movie was also performed by Miporin with the logical title of "BE-BOP-HIGHSCHOOL". What caught me as being a little different about her 3rd single from December 1985 is that the song doesn't sound anything like a rough-n'-tumble rock tune with wailing guitars and screaming vocals (not that I would ever think that Nakayama would ever growl out a lyric at that time or really at any time). Nope, instead, "BE-BOP-HIGHSCHOOL" is a an adorable aidoru number that would be along the same lines of an early Seiko Matsuda（松田聖子）tune, and it's even got what sounds like a country-n'-western steel guitar in there for some added interest.


Such is the genius of lyricist Takashi Matsumoto（松本隆）and composer Kyohei Tsutsumi（筒美京平）with arrangement by Mitsuo Hagita（萩田光雄）. "BE-BOP-HIGHSCHOOL" made it all the way up to No. 4 on Oricon and became the 54th-ranked single for 1986, so it had quite the long run on the charts. Considering how her character probably had the toughest of those punks wrapped around her pinkie, I wouldn't be surprised if she could have had them dancing backup behind her.
Posted by J-Canuck at 10:14 PM