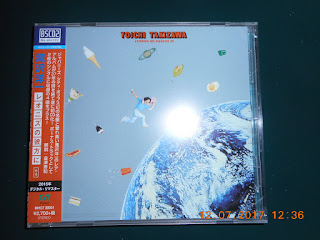 Almost a couple of years ago, I wrote about singer-songwriter Yoichi Takizawa's（滝沢洋一）1978 album, "Leonids no Kanata ni"（レオニズの彼方に）, which I believe is the sole album that he released. My impression was that he went after a certain bossa-tinged or just plain tropical AOR style after listening to it.


I was fortunate to get my hands on "Leonids no Kanata ni", and as is often the case nowadays with these remastered efforts, there are the bonus tracks. For Takizawa's album, these tracks came in the form of his two singles (A and B sides) from 1980 and 1982, "Miami Dreaming"（マイアミ・ドリーミング）and "Sunday Park" respectively.

For tonight, let me go over "Sunday Park" and its B-side "City Bird". When I first listened to the four songs at the end of the CD, it seems as if Takizawa tended towards more of a pop style although I think the AOR is still firmly in there. "Sunday Park" certainly starts off with a happy bang. Written by Sonomi Ari（阿里そのみ）and composed by Takizawa, the melodic progression seems to be that of a slower and cheerful Doobie Brothers groove as the lad sings about a fellow going slightly bonkers in his head while he and his girlfriend are taking a walk in the park and he internally fumbles about for the right words to express his love to her. I think Takizawa may have been going slightly bonkers himself trying to hit those high notes.

"City Bird" is a much more sombre affair written and composed by Takizawa with Keisuke Yamakawa（山川啓介）also helping out in the lyrics. It's a bluesy affair about a guy missing his old flame while trying to make life work in Tokyo and discovering that the road to achieving his dreams is far from a straight one. His voice sounds slightly ragged here and it works considering the lyrics here. Plus, there is some really nice piano and harmonica. What I like about it is that it starts off simply and ends off in the same way.
Posted by J-Canuck at 10:27 PM