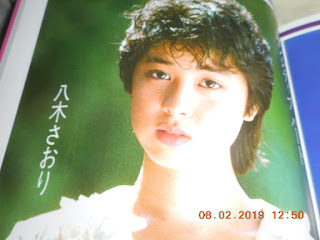 About a little over a year ago, I wrote an article about 80s aidoru Saori Yagi（八木さおり）who would later have a more successful career as an actress. The song was "Tsuki to Koigokoro"（月と恋心）, a fairly bouncy number composed by Tetsuya Komuro（小室哲哉）for her 2nd album in 1987.


I mentioned this in the original article but because of Komuro's influence, there was something about "Tsuki to Koigokoro" that reminded me of some of the songs that Misato Watanabe（渡辺美里）performed at around the same time, although I think Yagi's vocals weren't quite up to that singer's levels. Here, I'm talking about Yagi's debut single "Hitomi de Kataomoi" (Falling In Love with My Eyes), released in October 1986.

Written and composed by Etsuko and Takao Kisugi（来生えつこ・来生たかお）, "Hitomi de Kataomoi" is more of a dreamier mid-tempo aidoru tune about making that crucial eye contact and deciding that, yep, he's the one. I think this sort of tune fits Yagi better with the tandem of the Kisugi siblings (who've always been adept at the wistful love ballads) because of the sing-song style of her vocals, and I especially like the harmony that starts the refrain.