Toshiya Igarashi -- Before We Say Good-Bye 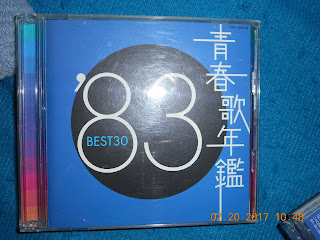 Before we say goodbye for today's entries on "Kayo Kyoku Plus", I just wanted to say that earlier today, I got together with some good friends, including fellow KKP collaborator Larry Chan, for lunch at my favourite izakaya, Kingyo. Very nice as usual and since I had my tonkatsu lunch, I got my dose of dietary fibre from the mountain of requisite cabbage. It ought to be a very regular Saturday, if you know what I mean.😌


Then, later in the afternoon, I got to see a certain movie of note. All I can say is that it didn't quite rise enough. But before we say goodbye to the Skywalker Saga, I just want to opine that as long as the potential for money and interest are still there, this isn't really going to end the Skywalker Saga (the name's Skywalker, Cade Skywalker).


But getting back to the matter at hand, before we say goodbye to this broadcasting night, allow me to introduce "Before We Say Good-Bye", a track from the 1983 album, "Lady Danger", by singer-music director Toshiya Igarashi（五十嵐寿也）. Beginning with some mysterious keyboard work and clinking of ice cubes in a glass, the strings then take us flying into some introspective high-in-the-sunset-clouds City Pop. I don't know whether it was indeed Igarashi who provided words and/or music but his comforting and crooning voice sounds fairly similar to that of Fujimal Yoshino（吉野藤丸）. The soundscape would be perfect except that I think the violin solo at the end went on a tad too long.

Igarashi does have a J-Wiki bio and it seems as if "Before We Say Good-Bye" was the B-side to his lone single "Kanojo no Nikka"（彼女の日課...Her Daily Routine）, also from 1983. In addition, "Lady Danger" ended up being his only album. But since then, Igarashi has provided a fair share of anison, primarily for "Transformers" in 1988 and also some tokusatsu songs for "Kamen Rider Black" in the previous year. That's too bad about him releasing just the one single and one album since I think he's got a pretty good voice and "Before We Say Good-Bye" itself is quite promising for whatever else is on the original LP.
Posted by J-Canuck at 11:22 PM